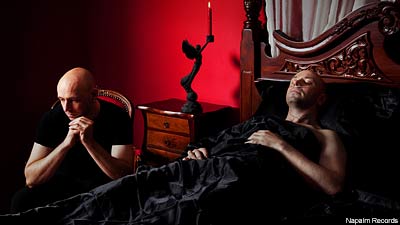 "It's a very naked, out-there thing for me," Ed Warby, best known as the drummer for Gorefest and Hail of Bullets tells Noisecreep about his new band, the 11th Hour. Naked in the sense that Warby plays all instruments heard on the 11th Hour's debut album 'Burden of Grief': guitar, bass, drums and keyboard. In addition to being a multi-instrumentalist, Warby sings the clean vocals, while Rogga Johansson (Edge of Sanity, Paganizer) provides the death grunts.

"I've sung before -- but behind closed doors. I used to do demos in Elegy, one of my first bands. We had a really lazy singer who wouldn't deliver when we needed him to. So I would come up with the vocal lines. I also sang with a band called Tempter for a while, but I didn't really enjoy being the singer, up front with just the microphone. So I kind of gave up on that. But for this, the lyrics were getting pretty personal. I did the vocals on the demos, and Rogga thought it sounded really good. I was half considering getting another singer involved, but he said I had to do it myself."

"So I put two songs with my vocals on them on MySpace, waiting to see what would happen. People are nowhere as cruel as they are on the Internet. If I suck, I'm going to know pretty soon! But the reactions were good and positive. So what the hell? I did it myself. The only lesser reviews I've had were because of the vocals, it's a real love or hate kind of voice, which I can imagine 'cause it's not your typical rough metal voice. It's quite a contrast with Rogga's growling and the heavy music. I like it and fortunately so do a lot of people. I got some criticism that I should drink more whiskey, but I'm pleased that Rogga pushed me in that direction to do it myself."

Lyrically, 'Burden of Grief' is a concept album about an unnamed man dying from terminal lung disease, coming to grips with his life and searching for redemption. "It's not autobiographical, per-se. But the main inspiration behind the disease theme, the funeral, is the death of my parents. At first I just wanted to have some gothic fantasy lyrics about castles and monsters. Rogga is really good at that, so I asked him to write me some Edgar Allan Poe stuff. He thought the music deserved something better than standard horror fare, something realistic. He showed me some lyrics about a guy who's sitting by a clock waiting to die, very dark but very non-gothic. Rogga wrote some lines for 'Weep for Me.' At that time, I was still thinking this guy had committed some sin that he was trying to deal with. That turned into the story we have now."

"Originally the album was going to be called 'Burden of Sin,' but I changed it to 'Burden of Grief' because of the story," admits Warby. "Both my parents died from lung disease a long time ago. I'm not dealing with some fresh trauma here. It's still painful but it's something that changed me as a person a lot. Especially the death of my father, he was the first one to die. That really influenced the way I look at life. So I invested my own emotions into a basically fictional story and came up with the tragedy in the man's past and the way he deals with that.

"Eventually he has to find a way to save his soul before he dies. There's a lot of personal little things in there. The funeral is very real to what I experienced myself, standing there and not being able to mourn properly because everybody around you is crying away. It's like I'm here and this is happening, but it doesn't really phase me, that comes after. A lot of the lyrics deal with pushing stuff that's painful away and locking it up so you don't have to think about it any more. But it always comes back somehow. I hope it's not too depressing to listen to."