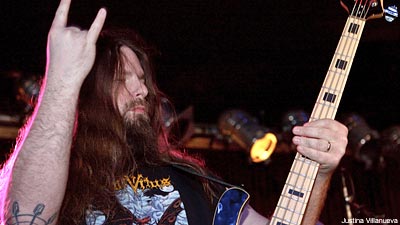 One of the roughest heartaches in life happens when a person loses one of their parents. No matter what kind of relationship a person has with their mother or father, that pain when they are gone is one of the hardest things to overcome.

"My mom passed away this week. Her favorite musician was BB King," Gates of Slumber bassist Jason McCash told the crowd at New York City's BB King's on Jan. 17. It was a moment for him to soak up how much the show meant to him. "This is my first show back after burying her," McCash added.

Afterward, the trio played 'Blood and Thunder.' No, it's not a Mastodon cover. It's the last song on their latest release, 'Hymns of Blood and Thunder.' Gates of Slumber kept their set limited to mostly newer songs. However, they did pull out an oldie. "We're gonna play one we've never played live before. Its for those who dwell in the deep," frontman Karl Simon said. The song was from 2006's 'Suffer No Guilt.'

Everything about their set was just right. And with this being the second time I've gotten to watch them within a year's time (they played with Zoroaster in July), I can say these doomsters are pretty hard to get tired of.

'Hymns of Blood and Thunder' is available now via Metal Blade Records.