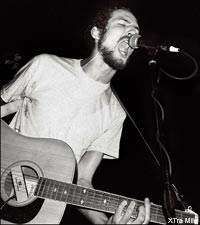 English folk singer-songwriter Frank Turner is the last person you'd expect to have a hardcore or punk rock background! But he does. So how did he get from A to B, making a sonic leap?

"After four years of hard touring with Million Dead, and plenty more before then rattling around bedrooms, bars, squats and other under-populated venues, I think I'd basically had enough of playing hardcore as a style," Turner told Noisecreep. "Don't get me wrong, I love it still, but I think I ran out of things to say in that way." Given the fact that hardcore is a genre and a scene where what you say is as important as how you say it, Turner did the noble thing and packed his bags. And he doesn't care if you think he's gone soft.

"I guess it was a confluence of a lot of different things," he said. "Partly getting bored of one genre. Partly being annoyed at constantly having to excuse the style to anyone who wasn't a Black Flag fan! I want to make music for everyone, not just enervated white kids in their late adolescence. Partly just getting older. I got less impressed with screaming sophomore politics at 100 miles-an-hour and more interested in Townes Van Zandt saying everything so simply and so amazingly with so few words. There was a practical side as well." 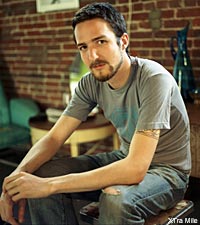 Million Dead was done in by what Turner deems as "internecine band politics. We were barely on speaking terms by the end of it, a situation which is particularly uncomfortable when you're squashed into each other's faces 24-hours-a-day in the back of a van. I didn't want to be in a band again right away, but then I'd recently moved out of my flat and put all my stuff into storage, or sold it, so I wanted, even needed, to keep touring."

The gravitational pull of playing music put Turner on stage with an acoustic guitar. "There's only so many styles you can play like that and I really wasn't convinced at the start that I was going to keep doing things this way for very long," he admitted. "But luckily enough, I seemed to have stumbled into my niche, for now. At the time, every decision made sense and didn't seem too radical. With the benefit of hindsight, I might side with the guys who think I'm mental."

Turner's Epitaph debut, 'Poetry of the Dead,' is due out in September.