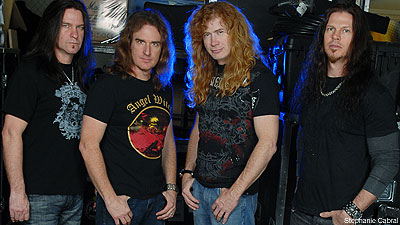 You've got to feel bad for James Lomenzo. Not even two days ago, the man suddenly lost his job as Megadeth's bassist, news that had the heavy metal world rejoicing. Not that anyone wanted to see Lomenzo get the boot. But the bassist had to go to make room for returning bassist Dave Ellefson, who left the band eight years ago.

Imagine losing your job and everyone being thrilled about it? Well, it's alright, because it seems Lomenzo's excited for the reunion of the Daves, too.

In a statement, Lomenzo says his "heart is full with your kindness and well wishes," and that the outpouring of support from fans has been "the richest part of my years with the mighty Megadeth." But he understands the excitement of longtime fans to have Ellefson, a founding member of the band, back in the fold.

"I'm truly excited about [guitarist/frontman Dave Mustaine and Ellefson] getting back together," Lomenzo's statement says. "I think it will be great for Megadeth fans. Anyone who knows me knows I love doing all kinds of things musically and otherwise, so I'm excited for what's ahead and very grateful for all the great music, fantastic shows and the many friends and fans I've come to know over the past four years. Stay tuned and I'll let you know what's next when it's next!"