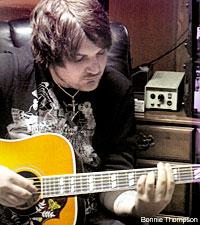 Scott Gross, the founding guitarist of Long Island's dearly departed From Autumn to Ashes, one of the bands responsible for crafting the blueprint of modern day, sing-scream / quiet-loud metalcore, is returning to music after he was sidelined by a near-fatal car accident which occurred on New Jersey's I-95 on September 13, 2007.

The axe slinger, who quit FATA after 2003's 'The Fiction We Live,' will enter the studio shortly for an as-yet unnamed project for which he wrote all of the music and most of the lyrics.

Gross reflected on the accident, telling Noisecreep, "The accident turned every single facet of my physical and metaphysical life inside out. It taught me what pain was, what family and friends were and what it means to fight. Not [to] fight for a cause, but to fight for your ability to merely get out of bed every morning and simply stand up. It changed every aspect of my critical and creative thinking."

The guitarist has undergone multiple surgeries, so much so that one of his legs is pretty much held together by metal. While he was recuperating from the devastating accident, which found another car pinning him down and causing massive leg, back and head injuries, Gross found inspiration for his new music endeavor, all the while completing a grueling period of physical therapy.

"This new project is my audio diary of this accident," he says. "It's my way of being able to put words and music to the tragedy and maybe someday that will help me wrap my head around it. I'm taking this particular [musical] direction because I've been so involved in writing heavier music with From Autumn to Ashes for so long, I just feel like I need to get further inside this time, and what better a time to get inside than when you're completely wide open and so close to. You get the idea. I still have heavy music in my heart and I feel like it's going come back around full swing, but for right now, this is what has to come out."

Gross, who left FATA because he was simply sick of the band's endless, rigorous life on the road, is working with his friend Kia, a former fill-in guitarist for Unearth, who will contribute vocals to the new project, which will also have keyboards in the mix. Gross expects to finally name the project and release it via 567 Records this year.

Filed Under: From Autumn to ashes, FromAutumnToAshes
Categories: Interviews
Comments
Leave A Comment
Back To Top