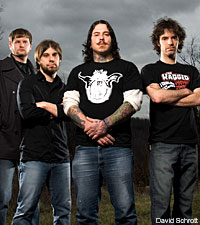 While music industry heavyweights scramble to figure out a new business model and a more effective delivery system in the wake of declining physical CD sales, Pennsylvania's Zao have responded to market conditions with their first album in nearly three years, 'Awake?,' which was produced by guitarist Scott Mellinger and mixed by As I Lay Dying's Tim Lambesis. The band, known for skull-liquefying riffage and vocalist Dan Weyandt's phlegmatic vocals, has been a bit dormant lately, but has returned to the scene with a new attitude and plan of attack.

Drummer Jeff Gretz caught up with Noisecreep and revealed, "We sort of scattered after our last tour in 2006. It was never said that the band was over, but we got to the point where we didn't want to move again until we were ready." Gretz kept impressively busy, relocating to New York City, touring with From Autumn to Ashes for a bit and playing with an 11-piece orchestral pop group called Emanuel and the Fear in the interim. He has also been working his way into the avant-garde improvisational circles, which is far cry from the groove-laden metalcore that Zao dole out!

"I think the new record is sort of an answer to the last one in a way," Gretz also said. "It's much more polished production, more melodic in some ways and heavier in others. It's sort of a mish-mash of different things Zao have toyed with stylistically over the years." The first single, "What Will You Find?," is currently available for maximum eardrum decimation is streaming online, and the album is available for pre-order. The record will be fully available on May 5 as a digital release accompanied by a limited, numbered physical pressing, ensuring its collectible status, which is still a practice in the HxCx scene from which Zao were birthed.

Download Zao Songs
Filed Under: 903514, As I Lay Dying, AsILayDying, Emanuel and the Fear, EmanuelAndTheFear, From Autumn to ashes, FromAutumnToAshes, zao
Categories: Interviews
Comments
Leave A Comment
Back To Top