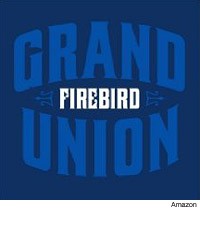 When guitarist/vocalist Bill Steer isn't grinding genitals or fermenting innards in Carcass, he opts for blues-based classic rock in Firebird. In fact, Firebird has just released its new album, 'Grand Union.' Although the title may seem simple, there's actually a triumvirate of reasons behind it.

"That was a phrase that had been kicking around my head for a long time," Steer told Noisecreep. "I think it probably started when I moved into my flat in Hackney, [London]. I was basically living on a corner that faces one branch of the Grand Union Canal. Also around that time, one of the pubs I was visiting quite regularly served a local beer called Grand Union. And the third aspect was just that this is probably the best lineup Firebird's ever had. We're a lot stronger than we've been in the past. So in a sense, that was a grand union also."

Speaking of the lineup, 'Grand Union' is Firebird's fifth album, yet it features the band's fourth bass player, Smok Smoczkiewicz. However, that depends on how you want to look at it, according to Steer.

"To be truthful, more like the fifth at least. You're going by people who have been on records. But in between, I've had a couple of other guys as well. I've actually lost count. I think it could be six bass players maybe that have been through the band at some time or another. You know how it is these days, everybody's in another band. Previously, I was dealing with people that had something else as their priority. Sooner or later, something goes wrong and you have to look elsewhere for somebody to do a tour or recording. Luckily with Smok, this is his priority. That's why the lineup has solidified over the last couple of years. It's meant that we play so much better, because the three of us have really become a unit. The whole thing's on a different level now."

Steer's aforementioned preference for locally-brewed pints was the inspiration behind the song 'Gold Label.' "I don't know what kind of stuff you get [in the United States], but over [in England] there's quite an old beer by Whitbread called Gold Label. It's normally sold in tiny gold cans. It used to be extremely strong. Now I think it's settled down at 8.5 percent [alcohol content]. It's not bad. But a few years back it was really potent. If you go into certain, very select pubs, you can find it in bottles. But I've never seen it on the shelf in a shop like that. It's just a really tasty drink. Instead of drinking numerous pints of average strength ale, you can just grab a couple of those and get a buzz instantly.

"I guess that's what that song's about really -- going back to my days when I lived in Liverpool Town Centre. If I was going out on my own, I'd just drink a couple of those or take a couple with me, just to loosen me up a bit." Currently, Steer opts for "Newcastle Brown. Basically, that's my all-purpose beer. You can drink that any time of day. It's very more-ish, one is never enough."