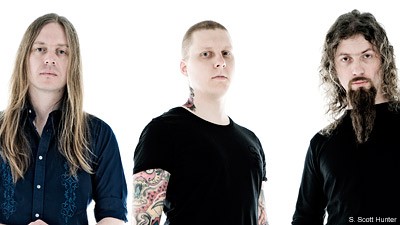 Sometimes simple is better. And while that adage didn't apply to guitarist/vocalist Bill Steer's previous bands, Carcass and Napalm Death, it's certainly apropos for his current musical focus, Firebird. Just look at the artwork adorning their new album, 'Grand Union.'

"I always feel like less is more, actually, with cover art," Steer told Noisecreep. "It seems like these days, everybody knows somebody who does a bit of graphic design on a computer. Like musicians overplaying, a lot of designers over-design. Just because they can do something, they will. I just wanted a really basic statement. Some of my favorite sleeves are in that vein. If you look at the second James Gang album, 'Rides Again.' Things like that jump out at you. That was kind of the thing we were aiming for."

On each of Firebird's five album covers, the band name has appeared in a different font, something Steer finds very appealing. "This whole idea of a logo is actually a fairly recent concept. Look at Led Zeppelin for example. They have used different logos at different times. I think it's probably around the time of Thin Lizzy, or certainly Iron Maiden, where people got this idea that you have a logo and you stick with it," Steer said. "Very much like a brand identity -- Coca-Cola or something. I didn't really like that, because how I felt in '99 when I started this group isn't quite how I feel now. If I had a logo that I'd had to remain with for the rest of the band's career, I probably wouldn't be very happy. It wouldn't be very representative. The truth is, we just don't have a logo per-se. We do different album covers and different T-shirts, whatever feels right at the time is what ends up on there."

The same can be said for the music. And on 'Grand Union,' it felt right to include three cover songs. Admittedly, that seems like a lot. "Oh yeah, you're dead right. That is immediately opening yourself up to accusations of, 'Do they have enough material?' In truth, we've got far too much material! It's such a never-ending backlog 'cause we've had huge gaps between albums. (Firebird's previous album, 'Hot Wings,' was released in 2006.)

"So that's never been the problem, really. We just wanted to do a balanced record. For me, I've always loved doing covers. I'm the one who's always campaigning to get this or that cover version onto a record. This time around, just purely by luck, I managed to get three on there. The James Taylor track ['Fool For You'], I've been talking about that one for years. I played the original to the others, and they hadn't necessarily heard any potential with it 'cause it is kind of laid back. But eventually, I at least got them to try it in rehearsal -- this took two years to do. It just locked right in and everyone suddenly realized that it would work. We just cranked it up a few notches.

"With the Duster Bennett tune ['Worried Mind'], again that's an artist I guess I feel hasn't really had his due. He achieved a tremendous amount in a very short space of time. To people that like blues of the '60s, he's known as a one-man band. His best record is primarily him playing everything at once: a bass drum, a hi-hat, guitar, harmonica and singing simultaneously. We had to rearrange the track so that it actually made sense as a group thing. But that was cool. It was just something we wanted to do. I always want to put something with harmonica on there.

"The Humble Pie song ['Four Day Creep'], that was really intended as a bonus track for the Japanese release. We've played that song many times live. We were opening with it on the Alabama Thunderpussy tour. We just bashed it out at the end of the session in the studio in one take. But then when it came to mixing, we realized it was quite strong, so we put in on, too. We're aware that it's unorthodox to put so many covers on a record, but they are three covers from three different areas of music. Part of the reason I started with this band was actually because I would be able to do covers. I was in a situation when I was younger where [Carcass] simply couldn't do that kind of thing. It wouldn't have worked. There's that, and the fact that I think it's quite important sometimes to be humble and tip your hat to certain people who have made a musical statement that says something for you. You just want to actually experience playing that tune in your own way."