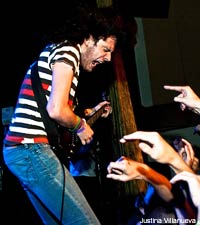 The Fall of Troy boys are nostalgic old souls. When Noisecreep asked drummer Andrew Forsman who are his favorite three-piece bands, Forsman replied with Nirvana and Jimi Hendrix with Mitch Mitchell and Noel Redding. "I listen to what I listened to in high school," Forsman said.

This was even more evident during the band's set at Bowery Ballroom, when frontman Thomas Erak claimed 'Webs' -- a song off their latest album -- as one of his favorite songs on 'In the Unlikely Event.' Erak's bluesy, soulful singing made me feel like I was at a '70s school dance. You know when they played slow songs and you could feel the singer's vocal chords vibrating your chest.

While on the road, the Fall of Troy doesn't have too many traditions. They are more concerned with getting to shows on time and preparing for an energetic show. The one ritualistic habit Forsman could think of happens right before a Fall of Troy set. "Me and Frank [Ene] our bass player usually listen to an Outkast song, any Outkast song. We just get pumped up. It's like in 'The Office,' when Dwight and Jim go on a sales call, Dwight plays a Van Halen song or something and punches the seat in front of him."

The band played songs from a range of their albums -- not just new stuff. The response to the older songs, like 'F.C.P.R.E.M.I.X.' drove the crowd mad. Kids tried touching Erak's fret board, so that it seemed to be covered with multicolored fingers. Meanwhile Forsman played most of the set smiling and laughing. It was a Fall of Troy playground and everyone was invited. You know, before the show sold out.

'In the Unlikely Event' will be released Oct. 6. In the meantime, you can catch the Fall of Troy on tour with Thursday and Young Widows.