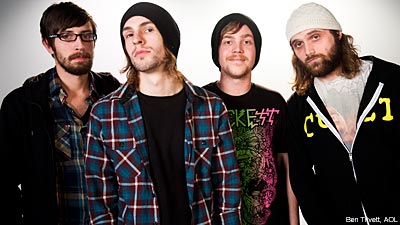 When Chiodos singer Craig Owens parted ways with the band in September of 2009, the band's horde of fans were bummed. Fast forward six months and Owens has been replaced by Brandon Bolmer, formerly of Yesterday's Rising, and the band is working on the follow-up to the critically acclaimed 'Bone Palace Ballet.'

Noisecreep got the exclusive, first interview with the band and Bolmer when they trekked across the Hudson River from the northern New Jersey studio where they are working on the new album to our New York City compound. No, we didn't get a preview of the album, but we did get a sneak peak into the band's psyche. 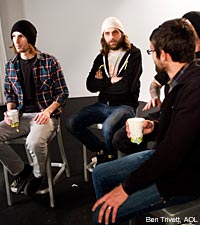 Watch this first in a series of four videos where keyboardist Bradley Bell, bassist Matt Goddard and drummer Tanner Wayne, alongside the new guy Bolmer, reveal that they would've broken up if they didn't make the vocal change.

They also discuss what it was like to replace Owens, how they chose Bolmer and Wayne for their vacant vocalist and drummer roles, Bolmer's past work in Yesterday's Rising and those dreaded day jobs.