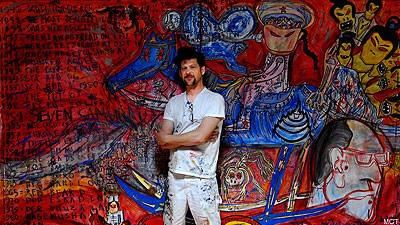 After accomplished metal bassist Jason Newsted (ex-Metallica, Voivod) had surgery on his right shoulder in 2005, the restless musician was left for months unable to play, and he started getting depressed. So his girlfriend, Nicole Leigh Smith, an accomplished artist, suggested he try painting something. Then she left for work. When she got back eight hours later, Newsted had painted the entire room.

The experience lit a creative fire under the bassist, who started painting with the frenzy of Van Gogh in one of his manic episodes.

"I dove in right away," he said in a recent interview. "It's lemons to lemonade, man. I couldn't do what I was meant to do, [so I painted all the time.]"

Five years later, Newsted has his own exhibit at the Micaela Gallery in San Francisco, which lasts until June 27. Although he's self-taught, he describes his work as "Contemporary American art influenced by Pablo Picasso, Jean Dubuffet and Jean-Michel Basquiat." Gallery owner Micaela Van Zwoll found out about Newsted's painting from a mutual friend, who scheduled a meeting.

"I was amazed at how prolific he is," Van Zwoll said. "A lot of energy went into his work. And I could see an evolution in his technique. He has a lot to be proud of. He's very, very talented."

Others have taken notice of Newsted's gift, including his ex-bandmate, Metallica drummer Lars Ulrich, who brought his son to the opening of the exhibition. "That was a big feather in the cap," Newsted said. "I actually want to do a piece for them. I have to go over and check out their house again and see what I can do."