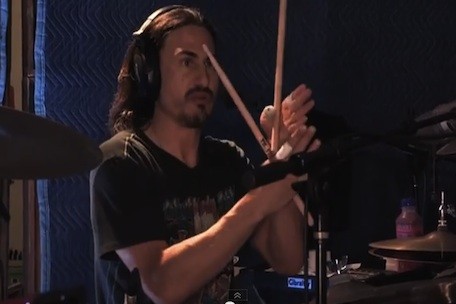 Rage Against the Machine drummer Brad Wilk has kept his career thriving, recently picking up the sticks and sitting behind the kit for Black Sabbath on their highly anticipated '13' album. Wilk says he was initially awestruck by the offer, but settled in pretty soon after meeting and performing with the metal pioneers.

Wilk, who also played with Audioslave and was a guest in Dave Grohl's 'Sound City' documentary earlier this year, is doing just fine career-wise. "I just couldn't help but feel like the 14-year-old kid that was sitting with the record player listening to the Black Sabbath records," said Wilk in the video posted below that centers on his work with the band. "After about a week and a half of settling in, I realized they poop and pee just like me. Whether it's old stories or listening to a new riff, you really want to absorb and be a sponge."

Unfortunately, Wilk won't be able to witness Black Sabbath "poop and pee" on the road, as Tommy Clufetos will serve as the group's tour drummer. Clufetos, who served as the fill-in for Bill Ward during the band's 2012 performances, is back behind the kit as the group is now touring in support of '13.' To check out Wilk mingling with the members of Black Sabbath, check out the video below.

As for Rage Against the Machine, the band remains on hiatus despite last year's reissue of their debut album. Guitarist Tom Morello squelched rumors that something new was afoot for the band. He added that while they meet yearly to discuss offers to perform, it is possible that they might have played their final show. If that's the case, at least Wilk seems to be picking up some interesting projects to fill the void.