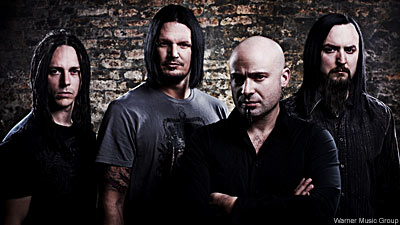 This year is the 10th year of Disturbed, and the band is not pulling any punches or taking this landmark year for granted. Rather than just put out a DVD of just one live show and slap a happy decade sticker on it, the upcoming 'Decade of Disturbed' DVD is collecting performances spanning from the band's entire career to this point.

This live clip -- the first full song preview from the long-awaited release -- is Disturbed playing the first single off their monster debut, 'The Sickness,' to an ocean of fans at the Rock-am-Ring Festival in Germany back in 2008.


And not to just stop at the DVD, the band is celebrating their four-time platinum debut album by releasing it earlier this week (March 23), fully remastered and remixed with expanded artwork and two unreleased bonus tracks ('Welcome Burden' and 'God of the Mind'). 'The Sickness' will also be available for the first time ever on vinyl, sporting coke bottle colors on a 140 gram regular weight wax.

The Chicago rockers are reported to be putting the finishing touches on the follow-up to 'Indestructible' with a release planned for later this year.