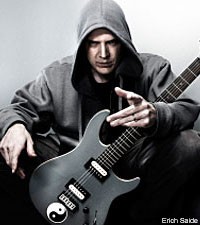 Longtime fans of Devin Townsend's work - be it with Strapping Young Lad and the Devin Townsend Band, or his solo projects, Ocean Machine, Infinity, Physicist, and Terria, or all of the above -- may not know what to think of Hevy Devy's new album, 'Ki' (pronounced "key"), at first. Seeing as Townsend's off both the sauce and the smoke, it's the first album Devin's written and recorded while sober.

It's a laid-back LP, and a stark contradiction to his work with Strapping. And, for Devin, that was sort of the point.

"'Ki' is the introduction to a sprawling theme," he tells Noisecreep. "You talk about chaotic music, wait until you hear this third record. It's insane music, and the only reason why I am doing that again is to say, 'Yeah, its insane music, but I'm not insane. In fact, I just really have a complicated mind, musically, and I want the lyrics for that one to be based just on exactly that: in the past, I have projected myself as this crazy hair, screaming-like-a-banshee-about-a-bunch-of-shit, and in hindsight, a lot of those lyrics and a lot of the energy that I was trying to represent with the kind of music that comes naturally -- chaotic, heavy music -- was distorted by me being high."

The third record, called 'Deconstruction,' will prove to Townsend's fans that, "not only can I still do the heavy stuff, I can do it in such a way that's infinitely more chaotic, yet controlled, and not coming from the frame of mind of someone who's out of his tree. I'm just a normal dude, who is predisposed to writing complicated music."

'Ki' came out back in May, and is the first of four Townsend plans to record and release this year. His objective with the discs? "I'm trying to summarize each part of what I'm able to do musically, in a kind of theme that goes from record to record," Townsend says. "On the surface, 'Ki' is a relatively mellow record, but its still based in heavy and it has a tension to it where it could go either way. At any point, it could go really quietly or it could explode, but it doesn't do either, that often. So the point of that is, when it starts, with 'Ki,' it leaves it open as to what the next records could do."

The series of discs wraps up the last three years for Townsend, which have been all about personal change -- starting a family, leaving bands, and sobering up. "So, with these four records, I'm saying, 'Ok, well, in the past I've tried to do really complicated music, with 'Alien' and 'Infinity,' and all these records I've done, but in a lot of ways, those were never executed with the amount of confidence I think is needed in order for it to be healthy, complicated music," he explains. "The only way I think I can wrap my head around music that's more complicated than anything I've done before is to do it sober."

While Townsend swore off touring after leaving Strapping Young Lad, he says he will tour again once the fourth record is finished. "If I'm doing music I can get behind, of course I'll tour," he says. "I just need to be really aware of my motivations for doing it."

Townsend also recommends listening to all four albums, in succession, once you've collected them all. "I think they stand on their own, at this point, but they should be heard back to back," he says. "For me, its about being honest with myself, and from an honest perspective, a clear, sober perspective, I like making complicated music. Yes, I enjoy heavy music, and yes, I enjoy quiet music. That's what I do, there's no secret to it, there's no magic to it, no metaphor to it, no conspiracy to it. It's just music, and that's what these four records represent."