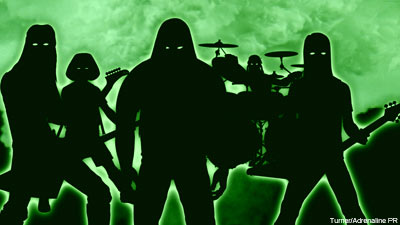 Death metal -- and 'Deth' metal -- fans can argue until they're blue in the face about what's the most important ingredient of a quality death metal album. Some factions will point to the blast beat as the quintessential element; others will celebrate a well-crafted, so-fast-it-will-rip-the-hair-right-from-the-root riff. Dethklok's Nathan Explosion, a well-respected death metal vocalist himself, told Noisecreep that neither of those are the true hallmark of death metal.

"I have to say, most important thing is -- while both of those are important -- garbled lyrics that are difficult to understand. That is dangerous," Nathan said. "It makes you ask yourself, 'What is that guy really saying? Is he talking about my mom?' If so, that could a threat or a set up to a home invasion. You don't know what he is saying. It could be a basket of compliments. But there is a lot of danger in being unintelligible."

The logic follows that of black metal bands, who purposely design indecipherable, unreadable logos in messy fonts! "Those logos could be saying, 'iced tea' or 'I want to have a home invasion at your house' or 'my band's name is Necrophagist' and you don't know," Nathan said.

Dethklok's album, 'Dethklok: The Dethalbum II' hit shelves Sept. 27, and since Dethklok are one of the world's biggest bands, they were able to write their own ticket and keep the music as deadly as they want, without having to cave into the pressure of what the mainstream wants, which is often more melody.

"No one tells us what to do," Nathan said. "If they tell us what to do, we have them removed. Forcibly. I point at a person and say to someone, 'Remove them.' And then I look around and they are gone, and I don't have to deal with them anymore. People from the label walk on eggshells around us, and we like it that way."

Nathan and his mates aren't self-impressed with having that type of power, either. All they care about is making more metal, with Nathan speculating that the band's existence is infinite. "Forever. Like infinity. An infinity's worth of time is how long we'll be around."

Dethklok fans can rejoice over that information!

Filed Under: dethklok, necrophagist
Categories: Interviews
Comments
Leave A Comment
Back To Top