On Oct. 16, animated virtual death metal heroes Dethklok are releasing Dethalbum III, their third full-length album. You know and love them from their Adult Swim animated series Metalocalypse, and as the show's co-creator (and guitarist-performer) Brendon Small recently told Noisecreep, the concept has gone farther than expected. But when you're as smart and funny as he is, we're not too surprised.

Brendon, did you have any idea when you started Dethklok that you'd find yourself promoting a third album?

First of all, I didn't know if the music stuff was going to happen at all – that it would have its own life. When you have a TV show, all you want to do is create a scenario where you can keep your job. Because TV is a big fat temp job. You're at the mercy of, "Are people interested?," "Will they tune in?" and all that. But because our numbers were good, it kept going. So I had no idea. As it has gone on though, it became more apparent there would be a third album, which I am just thrilled about.

And you seem to take it very seriously, the music that is. It's a great-sounding record.

Yes, the show is a comedy, it's all real stupid and silly, but every part of the comedy we've got to take seriously, to make it solid and make it work. The music is the same way. We have to take it all as seriously as a real band would take it, or it will fall on its face.

Comparing you to This Is Spinal Tap seems like a natural thing to do – it's a parody, but it's smart and somehow sort of real.

When I first saw This Is Spinal Tap, I was a snobbish music student. And I wasn't quite sure about it. But now? It's the best music movie ever. To make a world that lives and breathes like they do is amazing. The characters, the music, the playing of their own instruments – it's funny but they take it all seriously and all the stuff that needs to line up, lines up. It's the ultimate. They made the music stand on its feet, it lived and breathed and they gave a sh-t about it. If you can't do it like they did, you probably shouldn't even be doing the project in the first place. Tenacious D is another one I love. Their music is really awesome. Jack Black is an amazing singer. I think he's one of the best rock vocalists out there. And he's blended these cool styles like Andrew Lloyd Webber and classic rock and all this cool stuff. The records are just great, and their live show kicks ass. Just outstanding.

Watch a Clip from a Metalocalypse

What about The Rutles, the Beatles parody that Monty Python's Eric Idle got together. Did you like that?

Loved it. Didn't get into it until later because it wasn't really available. But like Spinal Tap, it was just way ahead of its time. And sort of like us in that, what makes it really interesting is that they don't exist.

Do other musicians get a kick out of you, the way they appreciate Spinal Tap?

I've gotten some really nice things from people I really respect in the business. And from young musicians, too. They really get it. I wanted to make it something I would have liked at age 15, so I love that young people appreciate Dethklok. Such a great age to start discovering music.

What did you listen to as a kid?

I had a friend, who was sort of like that older brother kind of guy who led me to the right stuff. Not everyone has a cool older brother or sister to do that. And he was like "Here, this is Gentle Giant. Here is some old Yes, this is old Genesis, King Diamond, Metallica. And this is a guy named Joe Satriani." Also, he'd say, "I play guitar, and I'll show you some chords." We're still friends today. He totally helped me become what I became. He knows that without him, I would have been different. I loved music, but he just got me into heavier stuff. And taught me to explore a little more.

Listen to 'I Ejaculate Fire' from Dethklok

What are the next few months like for you?

Well we are announcing a tour very soon. We were suppose to be touring now, but our co-headliner Lamb of God couldn't do it because of what happened with Randy. I hope everything is going well for them, it's just a ridiculous situation and he seems like a really nice guy. But since I had two months off, all of a sudden, I went back to what I used to do before all the TV stuff – standup comedy.

Well, that was my original thing after school. It's sort of how I became discovered as a TV show guy, doing standup in Boston, 12 or 13 years ago. All I'm trying to do is generate new stuff and some nights are amazing and some really suck. So it reminds you that you always to have to be working as hard as you can. I can play a music show in front of 20,000 people, no problem. All rehearsed and we know pretty much how it will go. But in a small comedy club, nothing is ever guaranteed. And so that keeps you completely honest and humble. 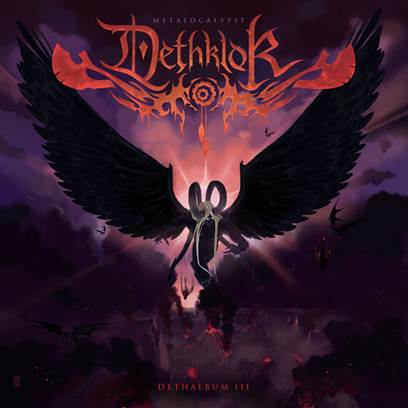 Dethalbum III will not only be released in its original CD and digital format, but also as a Deluxe Edition CD/DVD and a clean version of the CD. The Deluxe Edition CD/DVD will include a 32-minute behind-the-scenes documentary of the making of the album, as well as music videos and much more. A vinyl edition of the album with special etching will be released on Nov. 6, 2012.