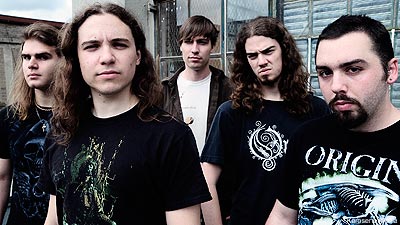 Canada's Derelict will be trekking across Canada on the Northern Shores Tour, which runs for 40 days, beginning in their native Montreal on April 30 with an opening slot for Job for a Cowboy and Whitechapel.

"We're pretty damn excited about this upcoming tour," frontman Eric Burnett said in a statement. "We're hitting some of the best spots in Canada, including places where our fans have supported us for years, as well as some new territory. Over the past couple of years we've been fortunate enough to do a couple tours across our great nation and this one is going to be our longest one yet. We hope to see a lot familiar faces at these upcoming shows, as well as new fans that have never seen us before. Everyone get ready!"

The band's album, 'Unspoken Words,' is currently streaming in its entirety online."We think this is a great idea, because although we're charting well around Canada, we still have tons of ground to cover outside of our home turf," Burnett told Noisecreep. "Giving fans a chance to hear an entire album is just about the best thing we could do aside from playing a live show. You get the full effect this way: the songs are in the order they are meant to be in and the five-part epic at the end of the album is complete with its intro and outro. Hopefully some people will like it enough to want to hear it again and possibly order a copy." That's the way album marketing goes in the digital age and big ups to Derelict for embracing, rather than fearing, it.

The band does not have in-store distro in the U.S. currently, so a full album stream online really does get the word out. "Initiatives like this full album stream are all geared at increasing our presence stateside so that we can eventually break into that market. Such a move will be a major focus for us going forward, and hopefully by 2011, we'll be able to say we're heading down to visit our neighbors to the South."

While it may take a minute for the band to "get down South" to play the U.S., the band continues to lay waste to its native Canada. Burnett said, "For the moment though, we are about to embark on our biggest tour to date, covering the majority of Canada in 40 days and about 30 shows. There will be lots of intense performances geared at conquering some new places, lots of craziness and -- as anyone who has traveled across this gigantic country can attest to -- lots of driving. Anyone interested in following our adventures throughout this trek can check out our official tour blog here: derelict.exclaim.ca."

Canadian fans can gobble up some new merch on this tour, too. "We now have full-color T-shirts of the 'Unspoken Words' and 'Carry the Flame' album covers, which can be viewed here: indiemerch.com/derelict," Burnett said.