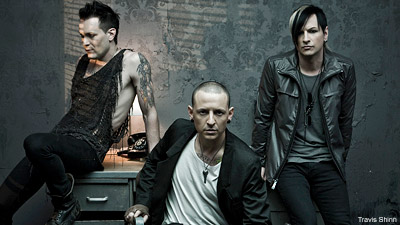 When a famous musician announces that they have a new side project they're working on, it's easy for the public to write off the entire thing before a single note is even heard. After all, for every S.O.D. and Bloodbath there's an MD.45 just waiting around the corner ready to pollute our stereos. That's why when Chester Bennington, Linkin Park's main vocalist, let the public know in 2006 that he had a project called Dead By Sunrise in the works, many were cautious. However, all suspicion was laid to rest when 'Crawl Back In,' Dead By Sunrise's debut single, was released this summer.

Rounded out by Ryan Shuck and Amir Derakh, who also play in Julien-K and are ex-members of Orgy, Dead By Sunrise will be dropping their first album, 'Out of Ashes,' on Oct. 13. The outfit's material blends the muscular guitars of modern rock with the darker pop sensibilities found in Bennington's vocal melodies. In a cool promotion, DBS are giving a few lucky fans from certain countries around the world a chance to hear the new album before anyone else does. The band want to hear what those listeners think and will publish their reviews for everyone else to check out.

One fan's album review will be chosen by the group and then be published exclusively on Noisecreep for the rest of the world to see! If you think you have the rock journalistic chops to make the cut, all you have to do is submit a writing sample. A select few will be invited to hear 'Out of Ashes' at one of Warner Brothers Records offices in California, New York, London, Germany, Austria, Switzerland, Sweden and Canada.

Be sure to check out all of the details on the contest, and stay tuned to Noisecreep for the latest on Dead By Sunrise.