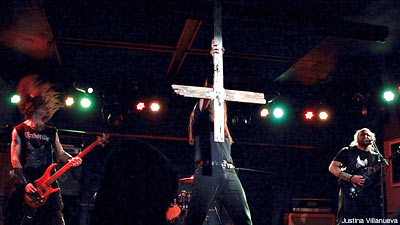 Crucifist may not be from Norway or Russia, but they do come from an exceptionally frosty place in the Northern Hemisphere -- Rochester, N.Y. When the old school black metallers played The Knitting Factory on Jan. 10 with Krallice, Ancient Wound and Humanity Falls they made sure their set was filled with dark, fast headbang-worthy tunes.

"This next song ended up being named after the band. It just worked that way by coincidence," said frontman Ron Blackwell. It's still a bit of an oddity to play black metal in America, despite how popular the genre has become in the last couple of years, the majority of the country will never understand the appeal. But it's even more of an oddity to wear corpse paint.

"We're proud to be labelmates with Krallice," the band said about their latest full length release, 'Demon-Haunted World.' It's available via Profound Lore.