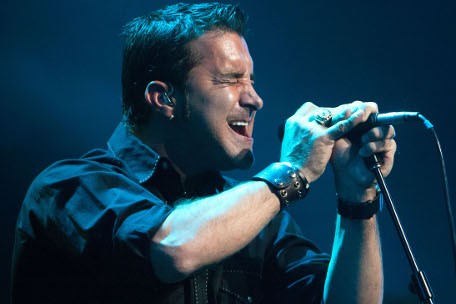 This coming April, Creed will be heading out a very special U.S. tour where the band will be performing their blockbuster albums 'My Own Prison' [1997] and 'Human Clay' [1999] in their entirety along with other assorted hits from their catalog.

"It feels really nice to be able to play these songs in order, the way we always meant them to be heard," Creed frontman Scott Stapp tells Noisecreep. To date, the Florida-based band has sold over 40 million albums worldwide.

"This is going to be a really busy year for Creed. Besides this tour, we're currently writing our fifth album. We hope to have some new music out there during some point on the tour. I'm also working on my book. It's going to honestly share all of the experiences that I've gone through so far. It's also going to clear up some things that were out there about me, but that's definitely not the focus of the book," reveals Stapp.

Turn on the big rock station in any major U.S. city, and you're bound to hear Creed's influence in most of the artists sitting on its playlist. Whether it's Shinedown or Theory of a Deadman, there's no denying that Creed have made an impact. Noisecreep asked Stapp if he's aware of the group's influence on today's radio heroes: "Yeah, I hear it all the time, but I'm glad about that. I'm honored and it's nice to see that we made an impact. From a guitar standpoint, I think we were much more metal-influenced than a lot of the other bands that were on the radio when we first came out. I also think the way we combined our influences was easily digestible. It connected with a lot of people.

"It gave a lot of kids out there hope that they too could start a band and do this. It helped change the landscape and the vibe of what rock 'n' roll was like back in the late '90s. Creed's success also helped launch Christian Rock radio and what's going on in that world these days. I know people like to call our music "post-grunge," but I really do hope that someone figures out a better name for it, because it deserves much more than that."

Since forming in 1995, Creed have never had it easy with the rock literati, but Stapp isn't sweating it: "If you look back at rock 'n' roll history, it's not the first time that Rolling Stone magazine hasn't embraced a band that over time still connects with millions of people. Just look at Led Zeppelin. Now, I'm not saying that we're in any way in the same league as Led Zeppelin, but the people at Rolling Stone weren't kind to them either back in the day. Rock magazines have been wrong before.

"We're also not the first band that has had big success to feel a backlash from the press. It happens in every area of life. Creed was going against the mainstream, but then we became the mainstream. But I'm at peace with the critics and all of that kind of stuff."

Since we were chatting with Stapp, we asked the singer what his thoughts were on the recent passing of record mogul Alan Meltzer. A co-founder of Wind-Up Records, the label that helped put Creed on the map, Meltzer died on Halloween of last year, and left one million dollars to his chauffeur and another $500,000 to his doorman. "Yeah, I read that. I'm going to talk a lot about Alan in my book, and really dive into the dynamic between Creed and the label. There's a lot of history there. All I have to say about it right now is God rest his soul and I'll leave it at that."

Filed Under: creed
Categories: Interviews, News
Comments
Leave A Comment
Back To Top