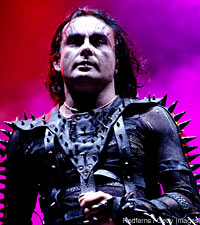 Cradle of Filth are indeed the blackest of the black, and they're happily polluting the Nuclear Blast USA roster as its newest signing. The band, which can be credited with ushering in the genre of black metal that has become much more popular today, will release its Nuclear Blast debut on Nov. 9.

The fall is such a fitting time for an autumnal band known for its theatrical stage shows populated with stilt walkers and giant puppets, its meaty subject matter -- since their last album 'Godspeed on the Devil's Thunder' was based around a child-killing French lord associated with Joan of Arc -- and its symphonically scary music.

Cradle will enter Monkey Puzzle studios in England to work on their latest slab of audio terror, another concept album revolving around Adam's pre-Eve wife, the lesser known demoness Lilith, who even had a chick-heavy touring festival named after her. Only Cradle of Filth can take such rich, historically-based characters and metallicize them in the most unholy, irreverent ways.