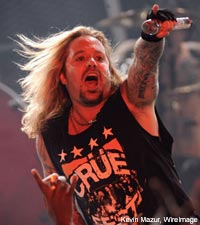 People have been inspired to do all sorts of things at Mötley Crüe shows. But what about fornication? That's the kind of backstage antics you imagine when the Crüe rolls through town. However, two weeks ago when they played Winnipeg, Canada, the sex was happening in front of the band, in the stands.

A video making the rounds online this week claims to catch the couple in the act. In it, we can see a blonde woman writhing in a man's lap early on in the band's set. According to varying reports, the woman was either engaged in a sex act with a man, or she was providing a lap dance to a couple. The video was posted on YouTube, and it shows security leading the couple from the arena.

A spokesman for the venue confirmed that the incident happened early in the rock band's show, but promised the couple were ejected from the building. "We were made aware of it as soon as people were able to," Brown said. "It's disappointing that someone would engage in that kind of behavior in such a crowded forum, like an arena during a concert."

The sex act continued through four songs, and at times, members of the crowd egged them on. When the couple were ushered out, you could hear other patrons cheering. Some seemed disappointed the impromptu sex show was cut short.

The video was shot by a man who said security "over-reacted" to the situation after receiving a complaint. Most spectators in that section didn't mind the exhibition and shouted at security staff to leave the woman alone, he claimed.

"That's why she was doing more of a show -- because people were encouraging her," said the man, who asked to remain anonymous. "That all lasted for probably four songs. It looked like a stripper show or something like that, but it wasn't really that bad."

Police were not called to formally charge the couple, as they agreed to leave "peacefully" and did not hurt other concertgoers. "Their punishment was getting kicked out of the concert, very early in the show," said the venue spokesperson. "We were able to get them out of the building without too much of a scene."