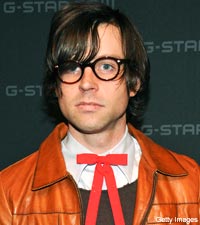 In what is perhaps a cruel joke or a sign of the impending apocalypse, country crooner Ryan Adams has gone metal! According to a post on his official Web site, Adams posted a raucous song and claimed, "We're going to begin pressing 'Orion,' my most legit metal record, on vinyl next week. Have a listen to the song below and let us at Paxam know if you'd be interested in purchasing one." He also posted the disclaimer that not a single B.C. Rich was harmed in the making of the record. Righteous!

Adams, the husband of pop star Mandy Moore -- a marriage of which was seen as an affront to his indie cred -- wasn't kidding when he said to let him know if you like. There's a nifty 'yes or no' poll, since he's apparently keeping count of who digs it and who doesn't.

After two or three listens to the clang 'n' clatter guitars and Adams' gravelly growl, we'd vote 'maybe' or 'almost yes,' if they were voting choices, about the songs metal quotient; it's more noisy hard rock, like Helmet or Jesus Lizard, really.

But it's heavy and it's decent. This isn't the first time Adams has played with the genre, so who the hell knows if he is really going metal or legitimizing his silly attempts at metal. Whatever the case, we'll be watching. Horns up, Ryan. Go get yourself a denim jacket with a 'Haunting the Chapel' patch sewn on the back.