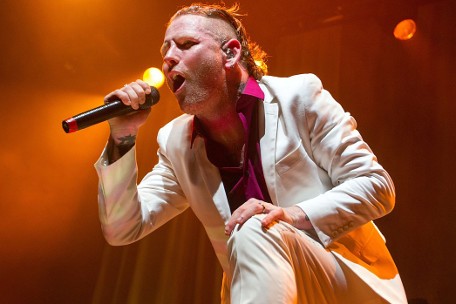 We've heard it at Noisecreep and it is a monster; a deep, dark, heavy duty crunch and burn metal classic. Stone Sour is also releasing a companion comic book series inspired by the album and written entirely by singer Corey Taylor. As well, the band is on the road this spring playing shows that will include a performance at the 5th annual Revolver Golden Gods Awards being held May 2 at Club Nokia here in Los Angeles.

We had a chance to speak with Taylor and as usual, he didn't disappoint. He's a great storyteller and just as passionate in conversation as he is on stage, whether he's fronting Stone Sour or that other group you may know him from, Slipknot.

Corey, we are loving this new album. We trust you are happy with it?

I knew it was really formidable right after I heard the rough mixes. We are talking serious ear candy. People that have heard it so far are totally getting it, how we put this together and segued into the next storyline, so it all seems to really be working for people. I'm as excited about this record as anything I've done with any band. It really sounds massive.

Watch 'Do Me A Favor' Lyric Video

And you've got your first comic book, too.

Yeah, and I have to tell you, for a comic book geek like me that's a really big deal. The thing is, being a comic book geek now chic. When I was a kid, you'd get your ass kicked for being into comic books and now it's like something that's in fashion, which I find very ironic.

Did you have a favorite comic book as a kid?

Well I was a Marvel kid and I would have to say that Spiderman is my all-time favorite character. As I got older, my tastes developed a little bit more and I would follow certain writers, like I really got into Grant Morrison. From the time I was 5, I was into comic books. From the time I learned how to read, it was all about comic books. I mean, I'm a comic book collector, and so now, as a grown-up geek to see what is absolutely totally fucking cool. Again, you have to understand, I was reading The Walking Dead when it came out as a comic. Now I see what is happening, I see this stuff on TV and in the movies, and I'm like, fuck you, people! For all of us that take comics seriously, we all stand back and kind of say, you've got a be kidding me. But then again, we can give the finger to everybody and say, we knew we knew how cool they were before they were cool.

Corey, was there a live show you saw early in life that blew you away?

There were a couple that did it for me. The first one I would have to say was the Metallica tour that they did for the album ...And Justice for All, with Megadeth and Alice in Chains, also on the bill. As iconic a band as Metallica has become, I think sometimes we forget just how raw they were in the beginning of their career and to a 15-year-old kid like me, it was just shattering. I mean it was beyond. But there is another show that I think had the biggest impact on my life and it's something that very few people get to experience.

Tell us about it.

Well I went to see a Slipknot show in Iowa. This was two years before I joined the band. Stone Sour was playing the next night and so we went to see Slipknot and I never really had that kind of feeling before; of seeing a band with that kind of energy. They just marched up through the crowd and then I said to myself, that's the band that I want to sing in. So think about it. How many people get to go see a band that's like their favorite band in the world, and then soon after that they find themselves being the lead singer? It's the fucking coolest thing in the world and I'm glad you asked about that because it's good for me to remember what it was like back in the day when I first saw Slipknot. I mean it's weird, I'm still a fan of the band from when I saw them back then, and just look at what happened. I'm telling you man, fucking unbelievable. 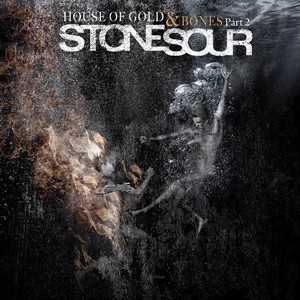 Stone Sour's House of Gold & Bones – Part 2 will arrive in stores on April 9 via Roadrunner Records and is up for pre-sale on Amazon. The comic book will can be pre-ordered at this link.