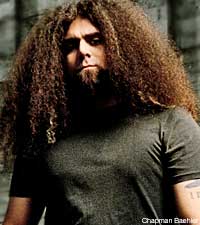 Coheed and Cambria's vocalist – the wiry-haired, soft-spoken genius known as Claudio Sanchez – isn't just a singer and guitarist known for pushing the prog-metal envelope with his complex music. He's also a best-selling author, who has penned the sci-fi comic mini-series 'The Armory Wars.' Sanchez isn't the only rocker who moonlights in the comic book medium.

Anthrax's Scott Ian, My Chemical Romance's Gerard Way and Dimmu Borgir have all dabbled in the medium in one way or another. Underneath the veneer of cool 'rockstardom,' some of your favorite artists are comic book geeks at heart. Geeks rejoice!

Sanchez recently launched a new series, dubbed 'Kill Audio,' which ships to fans in October via BOOM! Studios. The plot follows a troll and his eccentric posse. "'Kill Audio' is a dark comedy about an immortal man's life in a place where creativity is a controlled substance," Sanchez told Noisecreep. "Unlike the 'Amory Wars,' which is based lyrically on Coheed's albums, 'Kill Audio' is without any sort of real mental boundaries, so it gives me an outlet to write in all kinds of bizarre characters. 'Kill Audio' has a lot of humor on the surface, but a lot of heart in its message." Humor and heart? What perfect complements! 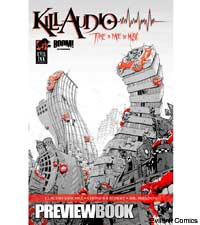 The singer/guitarist/graphic novelist has been enamored by comics since his childhood, telling Noisecreep, "What kid doesn't grow up reading superheroes? I ended up taking that love of comics into adulthood. I like submitting scripts to artists and being able to visually see their interpretation of the story. It's cool to have so many creative people working on a single piece and lending their perspective to one fictional world."

As for his personal viewpoint on fellow artisans, like Way, and why they meld their love of music with the comic medium, Sanchez said, "When someone takes an interest in doing a series because they've always loved the graphic novel medium, like Gerard Way – who was a comic guy before the music and has handled his book really well – then I say more power to them." Sounds like Sanchez puts his money (and his pen) where his mouth is.

In other Coheed news, the band is currently opening for Heaven & Hell through August. For those of you who doubt Coheed's 'true metal-ness,' your concerns should be quelled by the fact that metal legends like Dio and Tony Iommi deemed them good enough to take on tour!