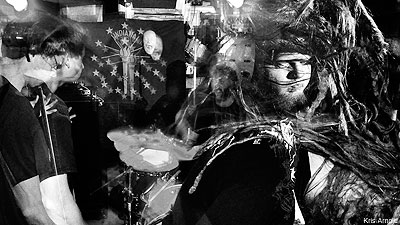 Misanthropic doom purveyors Coffinworm -- hailing from the unlikeliest of places, Indiana -- have unleashed one of 2010's most vicious record recently via the en fuego Profound Lore. The album is entitled 'When All Became None,' which I can only assume is a reference to human extinction. And with song titles such as 'Start Saving for Your Funeral,' 'Strip Nude for Your Killer' and 'High on the Reek of Your Burning Remains,' one has to wonder whether these Hoosiers are just trying to make grandmas' jaws drop or if they really find death, murder and suffering so appealing.

Noisecreep interrogated percussionist Carl Byers about 'When All Became None.' "Being in a real studio and having a substantial amount of time to focus on the recording process was a new experience to all of us," Byers explained. "However, hearing the mixes back after Sanford [Parker] worked his magic was like hearing the songs for the first time. It's certainly the best musical document I've been a part of, and I think the others would say the same."

As for being a part of the much-talked-about Profound Lore family? "Profound Lore is a perfect fit for us in my opinion," Byers said. "We'd been fans of the label for some time prior to being in contact with [owner] Chris [Bruni] about Coffinworm. As our singer Dave put it in a previous interview: 'Chris Bruni is a Cadillac of a man on a road crowded with Kias and Scions.' He doesn't work with bands for the sake of padding his roster with musical trash who have proven their 'worth' via MySpace friends and play counts, nor does he focus solely on a niche genre of music. Instead, he works with bands that he actually likes and is supportive of their vision. He's been 100 percent supportive of Coffinworm, and to that we are eternally grateful."

When asked about a hole they put in the wall of the kitchen in Sanford's studio, Byers recollected, "Haha! Yeah, the hole in the studio kitchen wall happened the night we finished production. We were celebrating and in an extremely drunken state. Total dick move, although it was an accident. I thought Sanford was gonna flip the next morning, but when I showed him the hole he just kinda chuckled."

'When All Became None' is out now on Profound Lore.