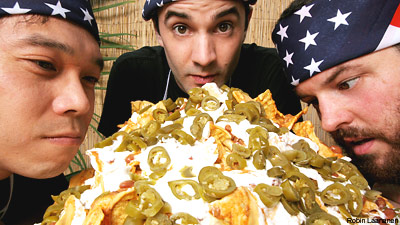 Playing music with one of your music heroes. What a thrill. What a dream come true. Coady Willis and Jared Warren of Big Business have been playing and recording with theirs, the Melvins, since 2002. "They (the Melvins) have taught us a lot of tricks," Coady from Big Business told Noisecreep when asked about what he's learned from playing with the legends of sludge. "I definitely respect those guys a lot more than before I knew them. And I respected that band a lot back then."

Coady laughed, a delightful burst filled with great memories behind it, when talking about the Melvins. "They have taught us how to get by when you're not selling a million records." He continued, "They figured out a way to make a living doing what they do without compromise, in any way."

The Melvins have been around for twenty-five years now and have influenced countless bands in sound (Nirvana Boris and Tool just to name drop a few), but the band is also known for their relentless vision of their art. They have never let a label or changing trends change that. Coady continued, "You can actually make a living being in a band going on tour and doing it yourself. You don't have to have a job. It's totally possible. You don't have to sell ten million records to do it and you don't have to not be yourselves. You can do all of it."

Cody reminisced of a moment with the Melvins. "It was interesting two years ago they played ATP and there were all these other bands that were like from their era like Dinosaur Jr, all these different 90s-Flipper was there too-a bunch of these 90s bands that were really big and it kind of dawned on me that the Melvins were the only band that never quit. They changed a lot but they had never taken time off or quit or stop making records or any of it. They have been doing it the whole time. They have been doing it in a way were they make a living off of it. That's their job. I think that's really cool."

Big Business is currently on the road in support of their upcoming record 'Mind The Drift' (It's a heavy and flashy record). The Melvins are going out on tour sans Coady and Jared and celebrating their Silver Anniversary by playing their entire 1993 album 'Houdini' and are being joined by original drummer Mike Dillard.