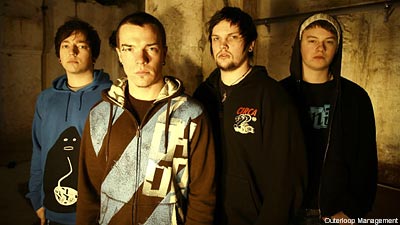 Killer Lyric: You taught us how to hate / Now take our hearts apart / Pay in blood / Now play in blood

Circle of Contempt -- one of the latest offerings from the growing Sumerian Records roster -- hit the metal scene hard with technical and progressive metalcore on their debut, 'Artifacts In Motion.' At the tender age of 19 (all of them), the words screamed over the sonic bedlam are also intense, as is the tradition of the genre. Though vocalist Riku Haavisto may have had a story or meaning behind the lyrics to 'Scour the Sharpside,' they are vague enough to be interpreted many different ways.

Earlier in the song he screams: "Look at them / Now they have stolen the truth / Look at us / Now forever enslaved". And at the very end: "I'll pay in blood to end this / This is how it ends / I found my own way to love." It seems that some people in positions of power have abused their responsibility and have lead some astray. This may refer to anyone as close as a friend, relative, or loved one, to something larger, like a religious or government group.

The Finnish band is currently on tour in the U.S. with Winds of Plague, Stick to Your Guns and Sleeping Giant.