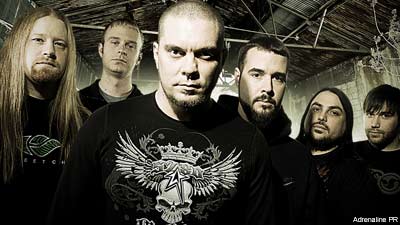 There's no denying that Chimaira had a great 2009. Their fifth album -- and second for Ferret -- 'The Infection' debuted in Billboard's top 30 and was the third most-spun record of the year at metal radio, according to music industry trade magazine FMQB. When Noisecreep caught up with vocalist Mark Hunter last year, he was happy about the band's success, but a bit less cheerful about the state of the music industry. "I'm very proud we weren't a band that fell off," he tells Noisecreep. "A lot of times it's hard to keep the momentum from record to record, and I'm pleased our fans are still interested in buying albums and supporting the band."

But while Hunter is grateful for his fans' support, he says the music industry is "tanking," with fewer people legally buying albums. "To be number 30 on the Billboard charts five or six years ago would have been a dream come true, and five or six years ago, the sales number we had would have been triple that," he says. "We've done a lot, but everybody keeps going down and going down, and it's just not as important anymore. Nobody in the metal scene is doing numbers that are mind-blowing."

Hunter continues, "There's a few artists selling ridiculous amounts, but other than that, no one's selling records. Even Nickelback, as popular as they are, are nowhere near doing the sales they were on their album before this. As cliché a term as 'rock is dead' is, I would say yeah, it is." Hunter thinks that metal needs a face lift, much in the way that there were fresh new bands out around the time of Chimaira's emergence.

"Our tier of bands, our wave, [Killswitch Engage], Lamb of God, we were the last legitimate new style of music to come out of metal," Hunter says. "There hasn't been anything new. Where's the next Slipknot or Metallica of the next band that takes over and changes what heavy metal is all about and gets everybody interested in it again?

One thing that might have helped 'The Infection' sell so well its first week was that there were a variety of different packages for the album. In addition to the standard CD version, there was also a special edition with a DVD and for the ultimate fan, a $100 'fan edition' that came in a metal briefcase with a flag, a USB drive, and more. Hunter found that Chimaira's fans preferred the one in the middle.

"Two years ago, I would have said packaging was the most important thing ever, but with this release, I'm seeing it isn't as important with our fan base," he says. "They didn't care about the regular CD version, and didn't seem to care as much about the superfan edition or the vinyl. They seemed to like the limited edition version with the CD/DVD combo. That seems to be the standard, and is going to be expected from now on. I think we can start weaning out the standard CD version. I think the future for our packaging is going to be more digital, and maybe a hard copy version with the songs and a DVD."