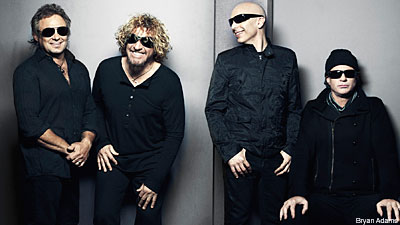 The band members of Chickenfoot are all about the classic hard rock feel in the new video for their song 'Sexy Little Thing.' Filmed primarily in black-and-white, the video features live performance shots of the group -- Van Halen's Sammy Hagar on vocals and Joe Satriani on guitar, bassist Michael Anthony and drummer Chad Smith of the Red Hot Chili Peppers -- amidst guitars, leather and a hot girl.

Previously, Chickenfoot have released videos for their first single, 'Oh Yeah,' and the track 'Soap on a Rope.' Although the band is comprised of some well-known musicians, Anthony has told Noisecreep, "We are not a super group. We're destroying that whole super group rumor now. We're a cult band. We're working on our cult following." Last month, their self-titled debut album was certified gold by the RIAA. And Chickenfoot continue to destroy that whole super group rumor with their latest video, 'Sexy Little Thing,' which we have for you right here.