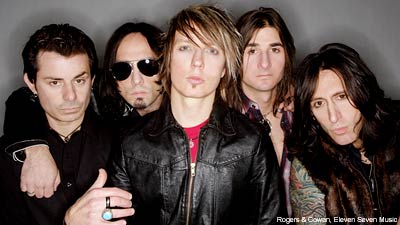 "I love Detroit," the Maryland native told Noisecreep. "I love that area. I love the rock 'n' roll up there. The other thing I love about it is you guys have a Maryland guy as a Detroit Lions new NFL head coach (Jim Schwartz). Now the Detroit Lions are my favorite NFC team. I'm really pulling for them."

After an 0-16 season, it's hard not to pull for them to do better. Allen, the former drummer for the alt rock band SR-71, was able to share his vision for the team with Schwartz on a fluke phone call from a friend.

"When I first talked to Nikki Sixx on the phone, I was just as excited talking to Jim Schwartz on the phone a couple of weeks ago," said Allen, whose band is signed to Sixx's label. "A buddy of mine knows him really well. They were out somewhere in Baltimore hanging out, and he fricking called me. At first he texted me, saying, 'I have Jim Schwartz here, man. He's a huge Charm City Devils fan; a huge John Allen fan.' I was like, 'You got to be kidding me, man.' I remembered Jim was from Maryland."

He decided to play it safe and tell his friend that he couldn't text and drive. "I was trying to be Mr. Safeguy for once," Allen said with a laugh. "He calls me and he goes, 'Here I'm putting Jim on with you.' I sounded like a little kid talking to a huge rock star, even though he's an NFL head coach."

Allen said he was stoked when Schwartz told him he'd seen him play drums "like 30 times."

"He's a real good dude," Allen said. "Unfortunately, I think the Lions are going to have a preseason game when we're in town so I probably won't be able to hook up with him. He invited me out to a practice. I would really love to take him up on that. You have the bad ass retro uniforms man. The team's got such a great heritage. Thanksgiving wouldn't be Thanksgiving without the Lions playing."