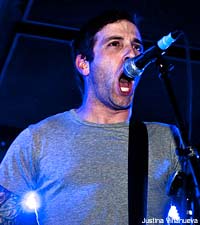 Manhattan's Knitting Factory was a three-level venue in Tribeca. Any given night, there were several rad shows happening simultaneously, giving the adamant music lover an everlasting tasty piece of gum to chew on. But like many venues in Manhattan (Coney Island High, Rock and Roll High School and CBGBs), rent hikes and city regulations got the best of The Knitting Factory. So they moved to Brooklyn, like anyone else would. And they hosted Cave In.

It had been a year or two since I'd been to the space formerly known as Luna Lounge -- and currently known as The Knitting Factory Brooklyn. It's a quarter to nine on a Thursday night. Trap Them occupy the stage and are as hostile as ever. A cymbal stand is pushed off to the floor, and bassist Steve Lacour is not too far from it. He is also on the floor of the stage. It's the end of their set, but it's not the end of the night's havoc.

"It's only our first show on tour and we've broken all of our gear and most of its borrowed. So thank you guys," Narrows frontman Dave Verellen said to the clapping crowd. The former Botch vocalist appreciated the reception to the new band's first New York show ever. The new project has the fury of Botch with a bit more ambiance -- and a lot more feedback.

At the second bar of the new Knitting Factory, you can hear all of this as if the band was in an aquarium. And with a glass wall dividing the concert area, it really feels like an aquarium, too. But at least you don't need earplugs.

"Yeah!!! I haven't seen these guys since the '70s," a fan jokingly shouted just as Cave In -- who recently returned from a four-year hiatus -- went from sound check to a song.

After a couple songs, the band was told they'd have to lower their P.A. The crowd started shouting for more vocals. "If you know the song, just turn up the vocals in your head," Cave In guitarist and vocalist Stephen Brodsky suggested to their fans.

Look forward to the band's EP/DVD in follow up to the vinyl-only release of 'Planets of Old.' It will be available in January 2010.