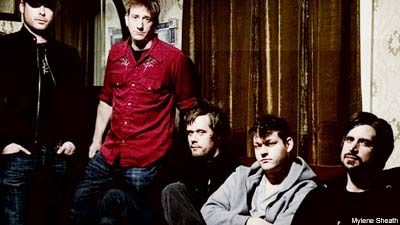 Massachusetts heavy post-rockers Caspian will reissue their first two discs on Mar. 16. Both records, 2005's debut EP, 'You Are the Conductor,' and the quintet's first full-length, 'The Four Trees,' will join last year's 'Tertia' on Kentucky-based indie Mylene Sheath.

"It's funny to hear the word 'reissue.' It makes us sound like we're way more important than we are," guitarist Philip Jamieson tells Noisecreep. "We were running low on pressings on both those records, so it made sense to move them over, have everything under one roof." The reissues will be out in time for Caspian's spring tour, which includes a stop at Austin's South by Southwest music conference in addition to extensive European dates.

With the metalgaze-leaning 'Tertia' still fresh, however, the reissues will mark the only Caspian releases until possibly 2012. "We try not to do the same thing twice. We feel like it's time to start changing it up. We've put limitations on what we're allowed to do. There's that buzz saw tremolo that we do. Well, there's none of that anymore. It's going to be a really long process," Jamieson says of writing new material. "We're going to be really selective with what we keep for the next record. We're not putting anything out unless we are 100 percent committed. Well, we never do anyway, but the next one is going to be a long time coming."

In the meantime, Caspian are going to town on the reissues, redoing the artwork and issuing a special, limited-edition vinyl package that includes both the 'Conductor' EP and 'Four Trees' together.

"We're finally going to retire that ugly-as-sin, purple 'Four Trees' cover. I still take full responsibility for it. It'll look how it was originally intended to look. In the haze of 2007, I can't remember how it came out looking like it did," he says. "But we don't have to worry about it anymore."