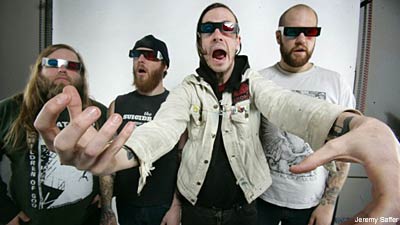 Toronto, Canada punk metal band Cancer Bats will play a one-off show July 17 in Toronto before heading out on a full Canadian tour that starts Aug. 5 in Vancouver, B.C. and runs through Aug. 21 in Halifax, N.S.

The Cancer Bats tour dates are in support of their third studio album, 'Bears, Mayors, Scraps and Bones,' which came out in April.

Recently, the band played European summer festivals, including Download in the U.K. and Rock Am Ring and Rock Im Park in Germany.

Cancer Bats also have toured with Every Time I Die, Billy Talent, Alexisonfire and Norma Jean. In addition, the Cancer Bats had a song featured in the Canadian sci-fi Thriller 'Splice,' which came out in June 4.