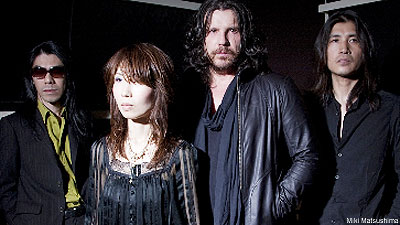 Always the band that can't be pinned down, the Japanese metal shape shifters of Boris continue to do the unexpected; this time bringing Ian Astbury of the Cult in for an EP simply called 'BXI.' The EP's four songs were recorded in Japan in late April where Astbury lent his gargantuan voice to three of the songs, and Boris guitarist Wata placed his aerial voice over a cover the The Cult song 'Rain.'

Astbury joined the band during the trio's recent set at Sydney, Australia's Vivid LIVE, giving fans an explosive taste of the EP, showcasing some of the material and doing a reportedly haunting cover of the Doors classic 'The End' -- a song the British singer has fine tuned experience belting out, as he fronts the posthumous the Doors Of The 21st Century. In a recent interview, drummer/vocalist Atsuo marked this new venture as like playing in a new band rather than a collaboration.

'BXI' is slated for a September release through Southern Lord with grand artwork coming by way of Sunn 0))) 's Stephen O'Malley.