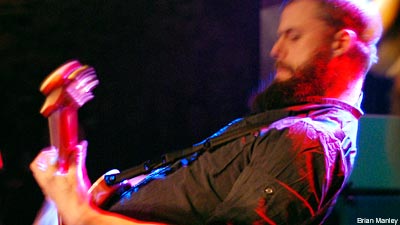 Technically speaking, Atlanta is not where the members of Baroness call home, that's Savanna, Ga. Atlanta grabbed them and claimed them back when 'Red Album' began to take off back in 2007. But now is the time of 'Blue Record,' and Baroness are carrying with them enough praise to make the end of their headlining tour at the Masquerade back on Dec. 11 -- a mark of new things to come for the band.

The Austin, TX outfit Iron Age, who have supported Baroness on much of this trek, warmed the crowd during some winter chills. Playing their charismatic early thrash with some forgotten hardcore, Iron Age draw piles of never-before-seen people decked in denim jackets that show off Mustaine curly puff hair as they headbang and sing along. Though loose and undeniably fierce in sound, the long stretch of the road displayed firmly on the band by their almost quiet demeanor on stage. 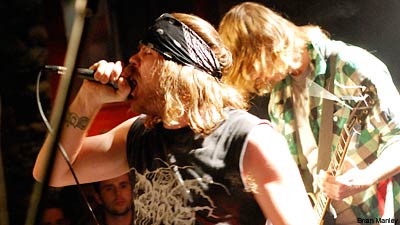 Torche teased the crowd, playing two new songs that continue the hook-laden stoner music that keep getting their albums re-pressed -- one song a fire fast instrumental song, the other the almost sexy drum drenched song 'King Beef' off of the band's forthcoming split with Boris. As always, vocalist/gutarist Steve Brooks was smiles the whole night. 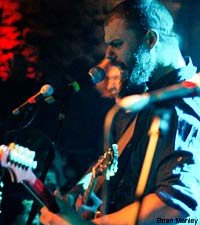 Baroness were greeted by an audience wanting only their moment with them. No cell phones lit up, Tweeting and texting during their set, but a cascading amount of girls huddled near the stage, biting lips with growing eyes as guitarist/singer John Baizley stomped and hurled himself into his verses and riffs. This was a new sight for a Baroness show -- but Mastodon's Brent Hinds looking on and heckling his former tourmates from the corner of the stage was not.

The set's focus was of course 'Blue Record,' but Baroness ended the night with a nod to those that have been with them from the start by playing 'Tower Falls,' from their debut record 'First.' From here, Baroness take to Europe. It's been said that once a band gets big enough they have no home, they're nomads going where they are demanded. This welcome home was Baroness' farewell. 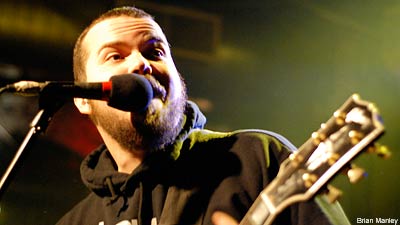