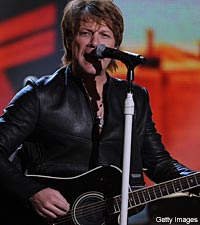 The Grammys were truly interactive this year, as fans were able to vote on one of the songs that Bon Jovi would play during their Grammy performance, which was shockingly the first time they've played the Grammy stage in their long and storied career.

The fan-selected song was their biggest hit, 'Livin' on a Prayer,' albeit a truncated version of the song. The band also played 'We Weren't Born to Follow' and 'Who Says You Can't Go Home.'

The New Jersey rockers have shifted dramatically away from their edgy glam of the '80s in favor of a more adult contemporary rock and country sound, but that didn't stop this writer's inner-seventh grader from rocking out during the jam! The band even got some help from Sugarland's Jennifer Nettles on 'Who Says You Can't Go Home.' She wasn't throwing up any metal horns, though.