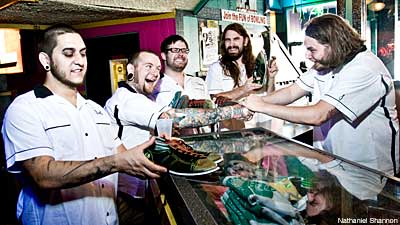 On Oct. 27, Toxic Holocaust and the Black Dahlia Murder performed in Nashville, much to the chagrin of the town's most conservative residents, who objected to the bands' arrival at the city's Christian-run Rocketown venue. The controversy even made the local news, and local parents are hopping mad that the venue will host such blasphemous acts.

"Unfortunately, the protesters here don't see the tongue-in-cheek aspect of any of this, and are taking everything at face value," says Toxic Holocaust's Joel Grind. "What else is new? Whatever you do don't look into or research anything, and don't, god forbid, think differently. F--- it, while we're at it, don't think at all."

Grind also cleared up a few things about the report. "To clear a few things up, there was a news clip that showed our video 'Nuke the Cross' and then directly cut to lyrics for a song called 'Hang the Pope.' Even though we did record a cover of that song on our first demo, that song is actually by Nuclear Assault. I think that was done intentionally to make the story have more impact and more shock value."

He went on to compliment the venue and make his opinion on religion in general known. "Secondly, I want to thank the people running Rocketown for allowing this show to go on despite the protests," he continues. "It just proves that being Christian and being closed-minded doesn't have to be synonymous with each other. Everyone has a right to believe in whatever they want. If it empowers you and doesn't infringe on anyone else, then I'm all for it. Sadly, the herd mentality of organized religion doesn't work like that. It's too much of a threat to the very foundation on which it's based. Let's end organized religion and stop the real evil in this world."

The Black Dahlia Murder and Toxic Holocaust are in the middle of a month-long trek, after which they'll be heading overseas with Skeletonwitch and Goatwhore.