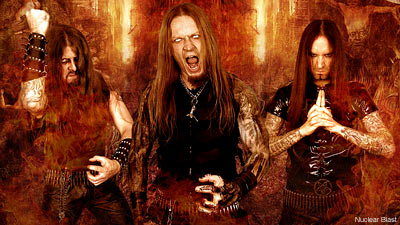 On Sept. 30, Austria's Belphegor will unleash their video for 'Der Geistertreiber,' and the "death metal band with heavy black metal influences," as main man Helmuth describes, promises that the video will be offensive. If the trailer that was posted last week online of the clip -- which was shot in Abtenau, Austria, with director Walter Fanninger behind the lens -- is any indication, it will be offensive... to most non-metalheads, anyways.

When Noisecreep spoke with Helmuth, he told us what we can expect from the clip. "We rented a cottage in the mountains, in the woods, for three days," he says. "We drank a lot of alcohol ... we did a lot of drugs and stuff like that, and [we made] the video in three days. It was amazing, and it was a cool feeling. No virgins were sacrificed."

In addition, he assures us that the video will be rife with "occult stuff, bondage and S&M, insanity ... it's very offensive. It's going to be insane."

Hmm. So, does Belphegor want to offend? Is that the goal? Does Belphegor fall in line with other European black metallers, and advocate church burnings, say? "To be honest, I don't care about that s---," says Helmuth. "If people are offended, it's fine by me. I don't care. We are very occultist people, naturally, and we show that in the lyrics and the music. Its not a big deal for us. I don't care if an idiot burns a church. You can nuke the f---ing planet, I don't care. Its not about that. Black metal rules the world. It's the best music."

Belphegor will release their latest album, 'Walpurgis Rites -- Hexenwahn,' on Oct. 20. And according to Helmuth, "its f---ing killer." And he's right. The songs are pure evil, and Helmuth's trademark snarl rips through the speakers with a thunderous fury. When you listen to the band's new one, it'll be obvious to your ears that Belphegor's influence tends to lean towards older black and death metal.

"I'm definitely a fan of the older stuff," he says. "I know that many people are listening to rock and metal and its good for the music, because it is the best music. I don't like most of the new bands. I like the old stuff. The beginning of blackened metal."

In November, Belphegor will be touring U.S., and Helmuth says he foresees the band will be touring nonstop, pretty much for the next year. "We want to stay on the road, and stay busy, traveling around with some metal people," he says. "We like to be out there, getting drunk, doing drugs ... all the funny stuff, all the metal stuff."