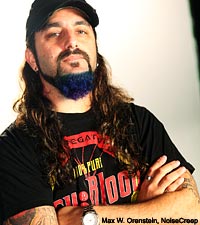 If you asked a roomful of metalheads to make separate lists of some of the best drummers in metal, some of those lists would undoubtedly include the late, great James 'the Rev' Sullivan, Avenged Sevenfold's late kitman, who died unexpectedly Dec. 28 at the age of 28. But almost every one of those lists would include Dream Theater's Mike Portnoy, who, it seems, has been enlisted by the A7X to track drums on their forthcoming album, which they'd written with the Rev before his sudden passing -- the cause of which has not yet been determined.

"[We] want our fans to know that, with Jimmy in our hearts, our journey to record has officially began," a statement from Avenged reads. "Jimmy helped leave this world an amazing gift and now it's our job to make sure to deliver that gift to our fans."

Like most metal fans, Portnoy was one of the Rev's favorite drummers, too, and hence, Avenged called on him to help finish what they started with their fallen brother. "We asked Jimmy's all-time favorite drummer Mike Portnoy to record on behalf of him," the statement adds. "Mike said it would be an honor and without question that's what Jim would have wanted. It's comforting to us that someone like Mike, who is undoubtedly revered as one of the best drummers in the world, held such respect and adoration for the Rev's abilities.

"Even though it will never be the same without our brother by our side, his essence lives in our hearts and through the music he helped create," the statement continues. "He was a legend before any of the success or any of that bulls--- and we are f---ing excited to lay this down for our fans, and especially for Jimmy."

It's the first bit of good news the band's fans have gotten this year. Of course, Portnoy's first priority will always be Dream Theater, so the question of who Avenged will tour with when this next record drops remains unanswered.

Fans of Avenged Sevenfold continue to wait for the Orange County coroner's office to make an official determination as to what claimed their drummer. Officials have ordered "toxicology, microscopic and laboratory tests," which will help them in their inquest.