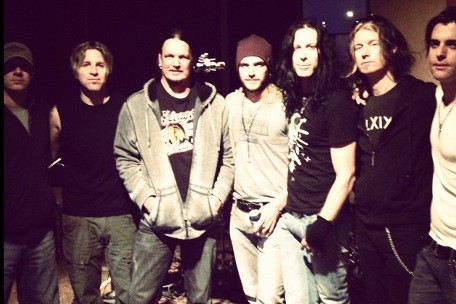 Canadian rockers Art of Dying were just in the studio in Chicago with Disturbed's Dan Donegan cutting an acoustic version of their current single, "Sorry." Donegan and Disturbed singer David Draiman signed the five-piece to their label, Intoxication Records, in 2009, and produced half of their current album, Vices and Virtues.

Art of Dying - frontman Jonny Hetherington, guitarists Tavis Stanley and Greg Bradley, bassist Cale Gontier and drummer Jeff Brown - are currently on the road with Shinedown as part of the Avalanche Tour until April 25. They will then start on summer festival dates in the U.S.

Noisecreep talked with Hetherington about the "Sorry" single, Donegan, and their better-than-most lyric video.

You've been performing "Sorry" acoustically for promo appearances. What are the plans for the recorded version?

It's our current single so we recorded it for [distributor] Warner Bros. to support that. But I think we're going to release the acoustic version to radio. We actually did the same thing for our first single, "Die Trying." We're slowly acquiring this catalog of acoustic songs so I'm hoping that they will eventually be released on an acoustic record.

When you release it, will it be a bonus track with the single or a standalone?

So far, I don't think there's a plan to have people pay for it. I think it will just be something that radio stations play. We're starting at Active Rock. That's our format and it's been great and also to Sirius' Octane, and then I think we'll be seeing how it does at Hot AC and Alternative and Top 40.

No. It's the five of us, the whole band. Usually when it's acoustic, it's the three of us, but sometimes we're starting to add percussion and bass. We really look up to the Alice In Chains Unplugged DVD. That to us, nothing better. 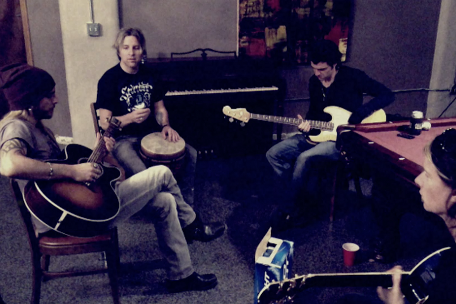 You cut it in one day

We did everything in a day and half. We finished most of the stuff we wanted to do the first day and then we started getting crazy with vibraslap and adding in shakers and tambourine. We were being experimental mostly the second day.

So this will be slightly augmented?

Working with Dan this time, is it more fun or he gets you to buckle down because there wasn't much time?

We did almost half Vices and Virtues with him. That was a crash course in Dan Donegan school of recording, where it's very regimented; the whole day is like from noon to midnight. You are going, going, going. Definitely a work ethic is prevalent in the room. He's very focused on tones, especially guitar because he's probably one of the greatest guitar players in the world, so he does some crazy stuff he grabs from experience.

Did he ease up on your guys a little bit because he knows you better?

Yeah. We're definitely more relaxed than when we first started out. Just like any time you work with someone the second time, you know a little bit more about each other so it's a little easier because you know how it's gonna be. He recognizes that we're a band that likes to have a lot of fun and party a lot while we're making our music because that's part of making our music.

Meaning in the studio, you're drinking?

Oh yeah. All the time. We take ourselves seriously, but at the same time it has to be a brilliant party. If it's not a stag party while we're recording, then it's probably not a great recording.

When do we get to hear the song?

I would guess May or June. But I don't know. It could be anytime. As "Sorry" [the album version] starts climbing up the radio charts, I think we'll give it to radio stations to help support it.

You haven't done a proper video, just a lyric video, which is actually really good, far better than most lyric videos.

We did that. Actually half the reason we didn't do a music video yet, one is that slow build of our song seems to be a real key, so it's killer to watch the song slowly climb. We actually have more time as a band to decide on a perfect music video and what we want to do and when we want to release it. The second thing is that lyric video turned out so good. We're not in it, but it almost has that quality of this is speaking for the song. I worked really hard personally on that lyric video just helping from the casting to the concept to the fonts on different lyrics, and worked really closely with the director and really wanted to speak for the song and have some emotion behind. By the time, the director Justin Coloma was done, he did a fantastic job. I was really impressed.

Maybe you could take those characters and they could be in a proper video for the song with the band, the confrontation between the guy and his ex?

It's a cool time for music because the rules are changing a little and six to 12 months ago there was no such thing as a lyric video, and a few years ago there was the most expensive music videos ever being made. Now, all of a sudden the budgets for music videos are a lot lower and there is this phenomenon of the lyric video which to me is very effective. The first lyric video I ever saw was just literally text on a screen and listening to the music and it struck me very deeply to see this, see the words. It's kind of like reading the lyrics printed in the jacket of a record the first time you hear it.

Usually the fans are making them.

Yeah. Which is better to be honest. Why not have a million versions? But for me, as long as those the words are accompanying the music and you get to actually see them, that's the best way to experience a record. Whether it's actually an album where you're throwing it on and opening the jacket and reading the words or whether you're on your laptop or your phone and watching the words on a screen, it's kind of cool. 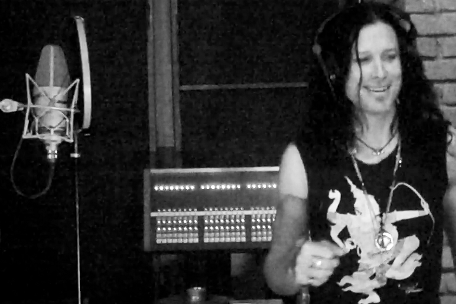 How well is your album doing?

It's our [label] debut and it's doing amazingly well. I can't even believe we're on our third single already. The first single, "Die Trying," went #4 at Active Rock and the second single, "Get Through This," went top 15 and "Sorry" right now is top 25.

Are you getting love in Canada?

No. We worked it [the self-titled album] so hard when we were independent that we had actual independent success. "Get Though This" was a top 20 single in Canada, but it was in 2007. It was our independent version that we recorded ourselves so that when we signed to Warner, and came back with "Get Through This" on our Warner release in 2011, a lot of Canadian stations said, 'We've already played this song 500 times.' We take it with a grain of salt because we know we have a lot of support in Canada."

It will all catch up and balance.

That's what we're waiting for. We're kind of waiting for America to catch up to what we built up independently in Canada and when the two collide it's gonna be awesome.

Art of Dying's Vices and Virtues is available now via Intoxication Records/Reprise. Get all of the band's tour dates at their official website.