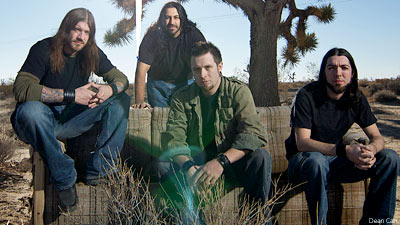 Arkaea, the project featuring Christian Olde Wolbers and Raymond Herrera, late of Fear Factory, are rolling right along since the release of 'Years in the Darkness.' As was Burton C. Bell when we asked him, drummer Herrera was tight-lipped about the Fear Factory developments, since that's a whole legal drama in and of itself.

"I have been doing rehearsals with Christian for about a week now we start our tour on the 26th of September," Herrera told Noiscreep."We will be touring with Kittie, Straight Line Stitch and Soil. It will be our first time touring with Straight Line Stitch and Soil, so we're definitely looking forward to it." The band also filmed a video for 'Gone Tomorrow,' which was lensed in the California desert in the heat of summer.

The only thing that Herrera had to say about Fear Factory was that the band's fans have been responsive to this new project. "The reaction has been very positive, and I get comments very often through my sites or by email, from fans that love the sound and overall feel of the record," he said. "Being that I am the drummer, most of the comments have been tiered towards my work on the record, and I am greatly appreciative for the kind words that fans have sent, and that is the reason why we do this in the first place."