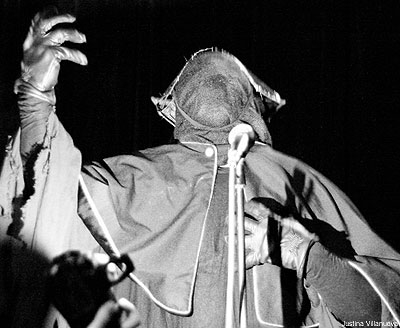 From May 14 to May 29, Australia's Portal spent most of their nights playing some of the most unnatural music to extreme metal fans in America. Eight-stringed instruments and drum kits can only be abused so many ways before emulating the chaotic, yet technically sound death metal darkness of Portal. As one fan put it, imagine two Incantation records sped up and played simultaneously. That is almost the soundtrack of Portal.

Their first U.S. appearance and first tour ever began in the equally as troubled Compton, Calif. and ended at the biggest death metal party of the year, Maryland Deathfest. The band -- known for their bizarre costumes (like a grandfather clock for a helmet) and eerie stage presence -- traveled into the States with only clothing and costumes. Noisecreep chatted with main guitarist Horror Illogium about the band's travels and experience in the U.S. 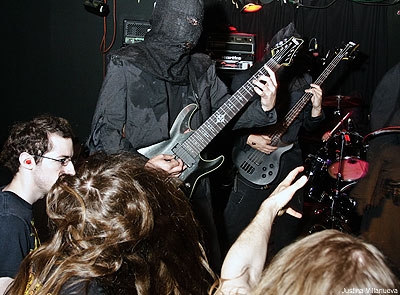 You bought two new guitars in the U.S. instead of bringing guitars you already own.

We had to purchase new guitars because the prices are insanely cheaper than ours. We bought two Schecter eight-string guitars and a Schecter bass. As well as a lot of drum wares.

Can you tell us a little about the price difference and pains of explaining guitars to customs officers?

We pay twice, three times the amount for any musical equipment due to import taxes, etc. Taking guitars into America would make many questions arise about taxable income, etc.

Are you content with your purchase (did you have any problems with it during a show or anything)?

Very content with the purchase personally and it did the job. As far as I am aware everyone is happy with their new guitars.

Did anyone else in the band buy new gear in the states?

All except The Curator.

At what point in your career did you start working with an eight-string? What were some of the trials and errors along the way?

The work with the eight-string began in 2008, Aphotic bought an ESP eight-string and it opened up a lot of tonal doors. The extended range seemed more capable of ugly horror more so than the seven-string. Not really any trials or errors, it was a natural progression.

Can you compare Maryland Deathfest to any festival in Australia? What were some of your favorite bands to watch that weekend?

I can compare it to a fest we had here called Metal for the Brain that we played in 2005, except it is not as long and consists of mainly Australian bands.

How good do those costumes smell now?

They always have a peculiar stench, but I think it may be time to consider washing them after the tour.

When do you guys start working on the next album? What can we expect?

We are always writing, but it needs to naturally procure itself. We have spent a lot of time in preparation for the U.S. tour, which has hindered the writing process from developing. We will explore a further spectral doom of a hideous plethora.

Filed Under: portal
Categories: Interviews
Comments
Leave A Comment
Back To Top