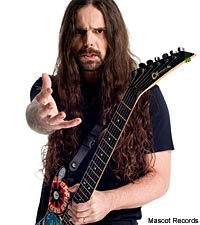 Sepultura's Andreas Kisser is indulging his other musical desires with his solo album, 'Hubris I & II,' a double-disc affair that's worlds removed from his main job. It's got a world music flair, but also retains a bit of crunch.

"I have been working on this for five years," Kisser told Noisecreep. "I had been doing other stuff that took my time, but this is different from everything I have done in Sepultura or anything else. The label wanted me to do a solo album, and I always write music for movies in Brazil, and I play acoustic guitar and for Sepultura. So I started organizing the stuff.

"The first album has vocals and some stuff in English, where the second album is more acoustic, flamenco, and related to my Brazilian influences. Recording it was a new experience for me and I am happy with the result."

Kisser studied classical guitar earlier in his career, saying, "I started in 1993 and 1994, when I was living in the States, and I played by ear. I liked what Randy Rhoads and Richie Blackmore were doing, and I always liked that style of music. That was something I started playing before I was even playing electric. I never left either one. Both have been a part of my career and my influences and my characteristics. I really enjoy it a lot, and I think a lot of right-hand and left-hand technique helps my electric playing. The training and the passion for guitar helps me in whatever style I play."

Download Andreas Kisser Songs
Filed Under: andreas kisser, AndreasKisser, Sepultura
Categories: Interviews
Comments
Leave A Comment
26 Bands Who Sound Nothing Like Their First Album
Where Did the Wall of Death Come From?
Max + Iggor Cavalera Book Fall Tour Playing Songs From Two Classic Sepultura Albums
Max Cavalera Thinks Sepultura’s ‘Roots’ Was Labeled Nu-Metal Because It Was Popular
Max Cavalera – ‘Blame Me’ for Sepultura’s Classic Lineup Split, Not My Wife
Sepultura Guitarist Mourns the Death of His Wife, Receives Support From Metal Peers
Max Cavalera Is Blessed to Be Among the ‘Last Brothers Together in Metal’
Interview – Max Cavalera Goes Deep on Learning English by Translating Metal Lyrics
Max + Iggor Cavalera Name Their 10 Favorite Albums When They Were Teenagers