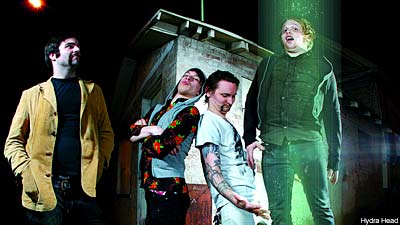 On March 9, Providence's Daughters will release what will be one of the best records you'll hear in 2010: 'Daughters,' a ferocious album with guitars that sound like something of a cross between the sound a car engine makes when it won't start raping a dentist drill. Or a dentist drill raping a megaphone.

Right now, you can hear a track from that disc a week ahead of its release. Our pals at MetalSucks are streaming "The Theatre Goer," the fourth track on 'Daughters.' It is a monster of a preview for fans who've been waiting more than three years for new material and a solid primer of what the rest of the record sounds like.

It is the first Daughters set to hit stores following the recent departure of half the band, which means there will not be any Daughters live gigs this spring. But the disc is a change of pace for the band. It isn't overwhelming, sonically, like the their previous releases have been. It's full of these strange, eerily psychedelic moments of psychosis, and it's rife with riffs and breaks that sound like heroin feels. There are even ethereal moments. One listen to this record, and people will be wondering why this band is not as big as Dillinger Escape Plan.

When Noisecreep spoke with frontman Alexis S.F. Marshall recently, he didn't seem too pleased about the band's new direction. "Some people are going to like it, and that's a good thing, I suppose," said Lex. "I never expect much. No one ever puts us on the cover of any magazines, and we're never on anybody's top-10 lists. I don't know, I should be saying good things about this record. It's going to be great, and everyone's going love it. That's what I should be saying."