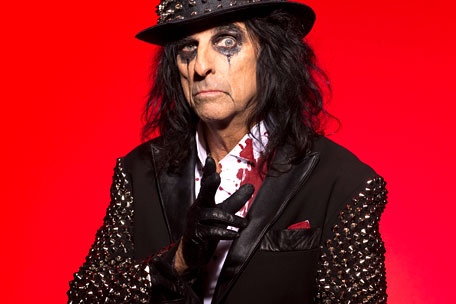 Johnny Depp has plenty of friends in the rock world, and in a recent interview with U.K. newspaper The Sun, shock-rock king Alice Cooper said he wants to tour with the actor. "If you really want to go out on tour, let me know and you can come with us," Cooper said. Depp previously joined Cooper on stage at the 100 Club in London, playing guitar. Marilyn Manson brought Depp on stage at the 2012 Revolver Golden Gods Awards, as well. [The Sun]

Oct. 29 will see the overseas release of XX – Two Decades of Love Metal, a new best-of collection by HIM. That means an Oct. 30 release date could be scheduled for the U.S. The Ville Valo-fronted band continues to work on a new album, reportedly due out this winter.

The track listing for XX – Two Decades of Love Metal is as follows:

Earlier this week, Trivium frontman and guitarist Matt Heafy popped his acoustic-performance cherry at Moscot's Eyewear in New York City, and he did so for the Mobileyes Foundation. Beforehand, he was excited but nervous about unplugging, saying, "When Trivium are playing, I can't talk as much as I would like to and I like to talk live; the guys would roll their eyes if I'm talking too much. It's nice to make it so intimate, with Trivium I never get nervous with shows no matter what kind of set it is but I'm always excited and I feel like I kind of learned how to break that barrier that makes it feel like it's a big show. The fact that I feel like our band has been able to translate a big show feeling like that to a small club show." He done good! [Loudwire]

Tyler Guida has quit Dr. Acula to rejoin My Bitter End -- a move that had long been rumored, according to some savvy online posters over at Lambgoat. My Bitter End issued a statement about Guida's return and the exit of Tim Zlinsky.

As most of you know, we had to part ways with Tim Zlinsky recently due to him not only living really far away, but also because of some creative differences we had as well. We love Tim. He's not only an amazing person, but his natural talent as a metal vocalist is unmatched and he will always be considered family to us.

With that being said though, it didn't feel like MBE when we released the two new songs with him. He knew and we knew it. We thought about auditioning others, but that didn't feel right either. The only reason we had Tim come and jam with us was because we go way back with him just like everyone else who is in the band.

So...after talking it over with him and solidifying plans, it's our pleasure as a band to welcome back our longtime friend and brother Tyler Guida into the band as lead vocalist. We have never lost touch with Tyler the entire time since being a band again, and he has always expressed that he wanted to have something to do with the band one way or another so it only felt right that he should be the lead voice of us once more. When we approached him w/ the idea he was instantly down for it, and that's that. So yea...Tyler is back. Expect great things from us in the future. Tours (not right away but eventually), LOTS of new music...the whole nine." [Lambgoat]