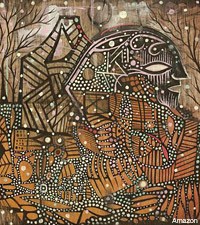 This is what I believe to be artist Gabe Felice's first foray into album-oriented art (with some layout assistance from Invisible Creature). This is notable since his handiwork is not typical of what you would find adorning the visual front of a metal band's newest release.

Felice gave Noisecreep some background behind the album art. "While talking about ideas for the Zao 'Awake?' album art with [vocalist] Dan, we decided upon the realm of intuition, E.S.P. and clairvoyance as a basis for the concept. While listening to the unmixed version of 'Awake?', I would draw and paint to form images that followed the sound structures and loosely correspond lyrically. The images formed from the music, lyrical content, and everything in between."

As far as the actual technical process, is concerned: "One of the drawings fell into a puddle of rubbing alcohol upon completion - but I covered it in shellac to preserve it - and sent a scan to [designers] Invisible Creature for print. I worked on old wood with fabric dye and acrylic paint for the album art. I placed metal objects in fire and burnt them into the wood like a branding iron to develop some unique textures. The scratches are made with an old ice pick."

Gabe is a Greensburg, PA native and has co-written lyrics for Zao's 'The Funeral of God' as well as 'Awake?' He has a strong history of work in fine art rather than something like graphic design or Photoshop illustration, two disciplines more congruent with music industry art. Much of his work contains blurry but colorful backgrounds supporting either intricate one-color line and dot figures or minamilist, stylized shapes posing as found objects or living things.