Recently, when Noisecreep interviewed Aerosmith's Joe Perry to talk about the band's much-anticipated new album, Music From Another Dimension!, the guitarist told us about a local musician and childhood friend in his Massachusetts hometown named Steve Rose that played a big part in his development as a guitar slinger.

Perry, 62, also told us he had been out of touch with Rose for about 12 years, so Noisecreep tracked him down and helped make sure the old friends could reconnect. Today, Rose is a retired math teacher, and has fond memories of his old pal. Humble and modest about the influence he had on Perry, all one has to do is listen to the Aerosmith star to understand that Rose had a profound influence on him. Rose was also generous enough to share some old stories and rare photos from his personal archive with Noisecreep.

Joe, can you remember an early concert in your life that helped shape the rest of your life?

Joe Perry: Oh yeah. Being at a high school dance, one of the first dances I went to. I mean, I was always a loner, I don't think I even went with anybody, but I'm sure I ran into a few of my friends there. And I saw this guy there I knew, Steve Rose. I knew his family and they owned a music store. Everyone in the family taught an instrument and he was the guitar player. He had a band at this dance and they sounded like a real band, you know? They sounded good. They played like Young Rascals songs -- those kinds of tunes that were on the radio. This was in about 1964 or 1965. Seeing them play, and it was the first time I'd ever seen a band live, and it was guys I knew - and actually have it sound like one of those bands on TV, was incredible to me.

He made some impression on you, huh?

Perry: Absolutely. It wasn't like Eric Clapton or something like that, but they played songs that sounded like a band on the radio. And I thought, wow, you can actually do that. You can be that guy in class, sweating over a history test, and that night you can put on a guitar and make those sounds. That was one the things, standing by the side of stage, watching the audience, watching the band – I thought, this is something I can do. That's all thanks to Steve Rose and I haven't talked to him in years and years, but he still lives in the same town. And he just impressed on me that, the music on TV and on the radio, it was not untouchable. It's like being a baseball fan at age seven and watching a major league game on TV. It's a pretty long jump to make it there. But Steve made it seem attainable. And he helped teach me to play. I don't know what it is that pushes me, but those of us that say the hell with everything else, I'm gonna do what I can do to make it, that piece of magic that's in you, thank God it's there and seeing Steve that night made me believe.


Steve, what do you remember about Joe from back then?

Steve Rose: Well, I was in a band called The Wildcats. I think the show Joe is recalling happened after a basketball game in our high school gym, at Hopedale High School. We were classmates; his mom was our elementary school phys ed teacher. There's probably few people in your life you will ever meet who knew at like 11-years-old that the only thing he wanted to do with his life was be a guitar player. After the Beatles were on Ed Sullivan, Joe came saw us and said, 'That's what I want to be.' I remember he and I having that conversation. A long conversation about life and what he wanted to do.

How was he as a student?

Rose: Great. He'd often come to the house and we'd sit and play together. I'd show him things I knew, and I tried to get him to read music. But that got to be too time consuming. He just wanted to play. And he's 99 percent self-taught and one percent Steve Rose [laughs]. I don't take all the credit he gives me, but he just wanted to play so bad, he'd play more than me - and I was playing 10-12 hours a day.

Did you stay in touch after Aerosmith formed?

Rose: Before they hit it really big, we'd see each other. Then of course it wasn't as easy. When they got big they moved into a different world, but whenever we see each other it's very special. I remember at Joe's 50th birthday party, he drove all over town showing everyone the local landmarks, where everything happened - he remembered everything. Great family history trips from Joe Perry - he always kept a nice tie to his home. That's a testament to Joe. No matter how big he got, he never forgot his way around his hometown.

Tell us about the pictures you've shared with us.

Rose: Well as far as the pictures, I've included one of myself with Joe at his 50th birthday party about 12 years ago. A great time had by all. My biggest regret was he and I didn't have the opportunity to play together. Then there is a shot of, from left to right John Alden, Joe Perry, Tony Niro and me. I do not remember the name of the band but, John, Joe, and Tony all played in Joe's and their first band. John was the drummer and Tony played keyboards. It was a time where every street had at least one garage with a band practicing in it. The Beatles made a lot of people want to become the next Beatles. 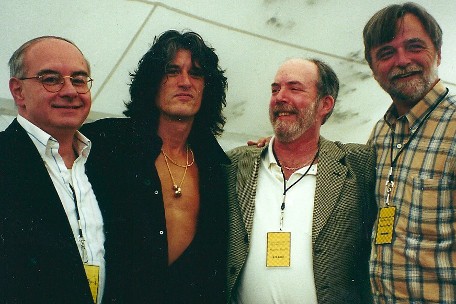 Then there is this photo of a young Steve Rose, you, playing a special guitar on TV.

Steve: Right. That is a picture of me when the band I was playing with called The Wildcats was on TV. That is the band Joe talks about in regards to me. I was 14-years-old and I had been playing guitar for about nine years. The TV show was Community Auditions and we won the first week and the next week, the last week's winning act would close the show. So we went on last but didn't realize that it was also the semi-finals and we were competing. The act that won was a 35-piece community band - since it was mail-in votes we never really had a chance on that one! I'm playing the solo to "Roll Over Beethoven" and the guitar I'm playing is my Gretch Country Gent. which I still play with. If you read the Rolling Stone article from the 'Guitar Gods' issue back in 1999, that is the guitar Joe talks about in great detail. They also asked Joe who his guitar hero was.

[We think you can guess what Perry's answer was.] 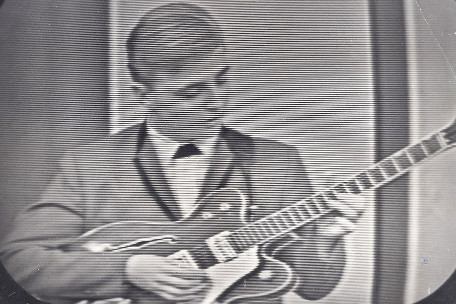 Aerosmith's 15th studio album, Music From Another Dimension!, will hit stores on Nov. 6 via Columbia Records. Pre-order the album on iTunes today!