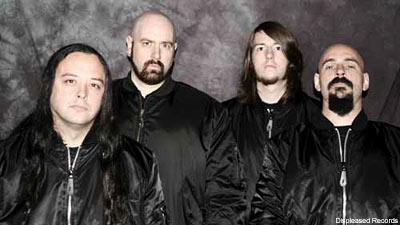 Killer Lyrics: In our world the few only matter / Everyone must pull their own weight / Racism is not true / Misanthropy / For n------s come in all colors!

"To some, this song is a bit over-the-top," Vincent Crowley, vocalist and bassist for Acheron, told Noisecreep. "To others, it is something that many have been wanting to hear aloud for many years."

'Power and Might', a track off of their 'The Final Conflict: Last Days of God' release on Displeased Records, is one track among many that propose controversial views -- and a controversial word -- that are taboo even among metal bands. And while the word isn't used in a specifically racist context, it may still furrow a few eyebrows in the left-leaning music industry.

Crowley is a former priest of the Church of Satan (he was ordained by church founder Anton Szandor LaVey himself), but he has retained plenty of the religions extreme views on things like Christianity and human nature. "The lyrics for this song is part of the concept theme for the album 'The Final Conflict: Last Days Of God,'" Crowley explained further. "It is when the modern idea of catering to the worthless is trampled under foot to make room for the new law of Lex Talionis! A world where you must be a productive part of society, not a leech! Where breeding is a honor, not a right!

"The human race is the only animal that helps those who don't help themselves. In this new age, only the select few will survive. F--- the other parasitic human waste!"