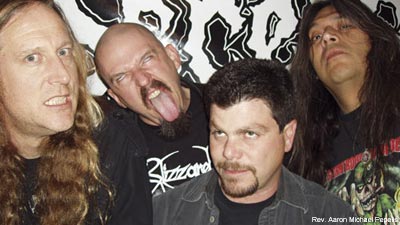 It takes a special person to write gore metal lyrics. To get in touch with that part of your brain and thought processes requires a specific skill set, in addition to having a strong, vomit-prone stomach. It's a talent that Abscess drummer/vocalist Chris Reifert posseses in spades. "The new album is pretty heavy, and it's definitely Abscess, with a super heavy sound that washes over you, with heavy guitar tones and a lot of depth and layers and a lot going on," Reifert told Noisecreep about 'Dawn of Inhumanity.'

While it's got a dirty death punk musical soul, what about the lyrics? Well, those are another thing, derived from an altered state of consciousness. "The lyrics have a hallucinogenic quality, instead of talking about corpses ripped in half," Reifert said. "There is a time and place for that. But I like to write about things from the back of my mind and surprise myself whenever possible. We want to f--- with our heads and everyone else's with this record! A lot of it is from the back of the brain. There are no stories to speak of."

The new album, 'The Dawn of Inhumanity,' doesn't follow any sort of narrative pattern or structure, and that's just how Abscess like it. "These are feelings straight from the back of the brain," Reifert, who cut his teeth in Death and Autopsy, said. "There is no storyline." One might think that in order to achieve a hallucinogenic vibe, a lyricist must engage in a dalliance with hallucinogenic drugs. But Reifert only copped to "snorting dried up banana peels religiously, 12 times a day. I am excessive!"

Dried up banana peels aside, Reifert is proud of the fact that his music will terrify conservative Republicans and right wing pundits across red states and beyond. "We go there," Reifert said. "They have it in the back of their brains, thinking about weird stuff, but they never admit it. The thoughts may not always be about gore or sexual deviance, but we find that weird place in the back of our brains and scream about it over metal."